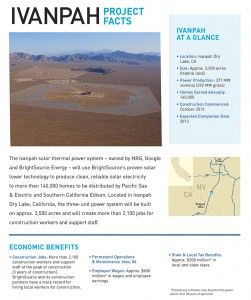 “The Ivanpah project is a shining example of how America is becoming a world leader in solar energy,” said Moniz. It “shows that building a clean energy economy creates jobs, curbs greenhouse gas emissions and fosters American innovation.”

Moniz’s boosterish remarks sound very much like the giddy comments made by his immediate predecessor, former Energy Secretary Steven Chu[2], when he was in Freemont in 2009 to dedicate the Solyndra[3] solar panel manufacturing plant.

Chu predicted Solyndra’s new plant would “kick off many more” such groundbreakings by clean energy companies, which would usher in “the second industrial revolution.”

However, in 2011 Solyndra went belly up, taking $535 billion in the federal taxpayers’ subsidies with it. While the start-up solar panel manufacturer’s copper indium gallium diselenide (CIGS) thin-film technology worked well enough, it simply was not economically competitive with conventional, flat silicon panels.

Ivanpah Solar, which was gifted a whopping $1.6 billion federal loan guarantee, has run in to the same problem as Solyndra – its technology is far more expensive than competing technologies.

Indeed, SEGS uses solar thermal power to produce its 392 megawatts. Its “generating system” has more than 300,000 “heliostats” – mirrors to the lay public – spread over 5.5 square miles in the Mohave desert.

The heliostats reflect sunlight onto boilers atop three towers, each of which is reportedly 150 feet taller than the Statue of Liberty. The entire complex is said to be visible from the International Space Station.

Yet, even the companies that jointly own Ivanpah Solar – BrightSource Energy[4], NRG Energy[5] and Google[6] — acknowledge that their $2.2 billion clean energy venture has been undercut by photovoltaic technology, which has fallen significantly in price in recent years.

“What really gets me excited in the morning,” he said, “is that there are 50 million American buildings that should have solar PV on them.”

Quite unintentionally, Crane has made a persuasive argument against government subsidy of clean energy.

And Moniz’s department bet $1.6 billion on solar thermal power, the tech used by Ivanpah Solar Energy Generating System, when solar photovoltaic is shaping up as the marketplace winner.