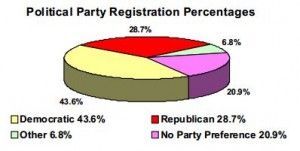 [1]“No Party Preference” continues its gradual rise in voter registrations according to new data released today[2] by California Secretary of State Debra Bowen.

The most dramatic change was the increase in No Party Preference, which nearly doubled in the 16-year period. And most of that increase came out of Republicans.

However, the dramatic increase in No Party Preference has slowed somewhat in recent years, rising to 20.9 percent in 2013 from 20.2 percent in 2010, or 0.23 percentage points per year.

Moreover, with new Republican Party Chairman Jim Brulte now emphasizing a “ground game” of registering more GOP voters and reaching out to Hispanics, African Americans and Asians, the Republican slide could be halted, or even reversed. As Joel B. Pollak noted [4]of Republican Kevin Faulconer’s victory for San Diego mayor:

“Ground game, for the win. The unions helped [Democrat David] Alvarez outspend Faulconer, and it was presumed by many that the cash would go into building an unstoppable ground game for the Democrat. But it was the GOP that turned in the superior performance, using motivated volunteers to make sure the next mayor after Filner would not be a close ally from the same party. The time to build that machine is now–not 2016.”

Another factor was cited by Scott Lewis in Voice of San Diego[5]:

“And that’s at the heart of Alvarez’s loss. The coalition behind Alvarez spent millions trying to avoid this and failed.”

It’s as old as the Jefferson-Adams presidential campaign of 1800[6]: get-out-the vote campaigns usually are the key to victory.

Other highlights from the Secretary of State’s report, comparing this snapshot of voters today with those four years ago at the beginning of the last gubernatorial election:

The GOP’s lowest registration was in San Francisco[8], at 8.6 percent.