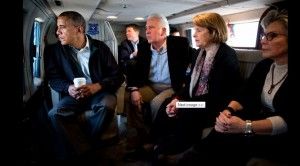 [1]On Friday Feb. 14,  President Barack Obama choppered into California’s drought zone in Democratic-leaning Fresno. As shown in the adjacent photo from the White House, he traveled with U.S. Sens. Dianne Feinstein and Barbara Boxer and Rep. Jim Costa, all California Democrats.

He surveyed the damage from two simultaneous droughts. One drought was caused by nature from a third consecutive year of dry weather.

The second drought was caused by a 58 percent cutback in farm water since 1990 in the Central Valley to restore salmon runs to the San Joaquin River. It’s shown in the following chart from the Nov. 2013 District Workshop of the Bay Area Delta Conservation Plan of the Delta Habitat Conservation and Conveyance Program.[2] It clearly shows the sharp drop in water allocation the past 24 years. 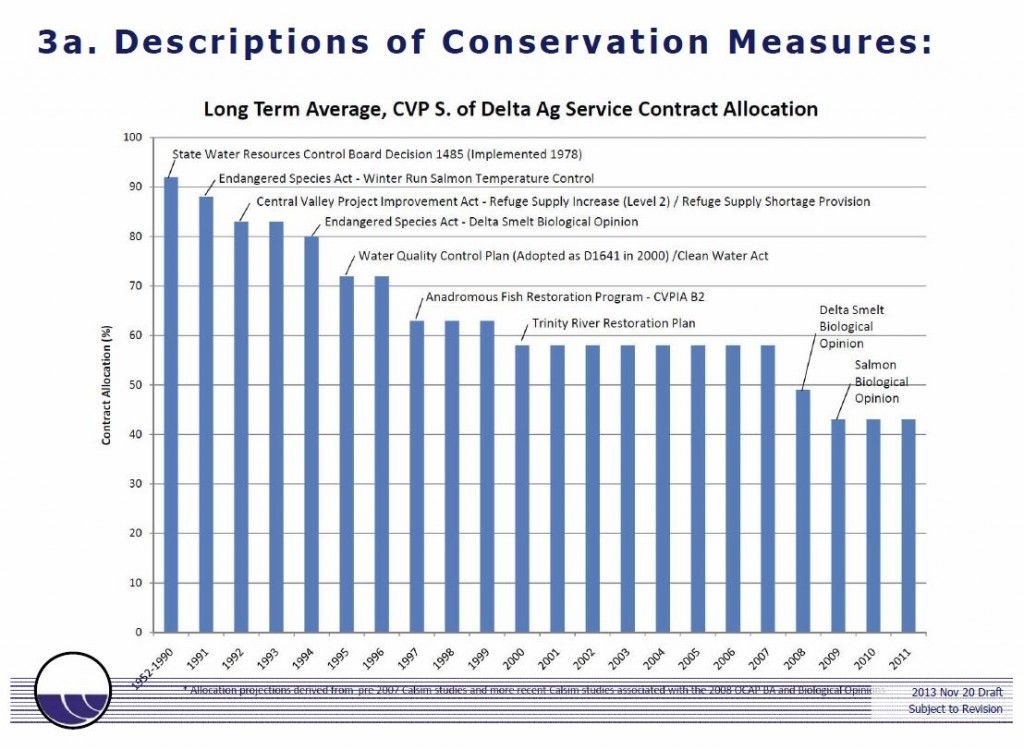 Reported estimates of the toll of this second man-made drought on the farm economy are a staggering 500,000 acres of Central Valley farmland fallowed. Water to irrigate that much farmland in a year would entirely drain the San Luis Reservoir in Merced when it is at full capacity. It is currently only at 32 percent of capacity[4].

Because of the drought, it is reported that the farm town of Mendota is expected to suffer a 50 percent unemployment rate[5]. Also, seventeen Central Valley water districts[6] are at risk of running out of drinking water in two to four more months.

The politics surrounding drought have also hit a pitch. Republican cherry farmer Andy Vidak[7], R-Hanford, captured a state Senate seat last year from Democrats in a 60 percent Hispanic district running on the drought issue. Republican Kevin Faulconer[8] just won the mayor’s office in the City of San Diego, in the state’s driest urban county. Of course, other issues were at stake in these races but the drought is thought to have inclined some voters toward the GOP.

Obama’s response to California’s double drought was to treat it only as a natural disaster by offering a Hurricane Katrina-like package of $100 million in livestock-disaster aid, $60 million in food bank funding, and $13 million dedicated to helping rural towns that could soon run out of drinking water.

But some farmers weren’t too receptive to disaster relief without any regulatory relief.  Sarah Woolf[9] of Clark Brothers farming in Fresno said, “Throwing money at it (the drought) is not going to solve the long-term problem.”  Mark Borba of Borba Farms echoed Woolf: “We don’t want money. We don’t want a handout.”  The reason that farmers don’t want some of the drought relief is that they would have to give up more farm water in return for subsidized crop insurance.

Obama’s relief package of food-bank funding and help for farm labor towns is targeted at Democratic constituencies.  The funding for food banks is part of the recently passed 2013 Farm Bill[10].  Likewise, livestock disaster aid was already included in the recently passed Farm Bill[11].  California alone could get $100 million for livestock losses.  Obama’s drought relief package did not include anything that wasn’t already included in the Farm Bill.

Responding to critics of crop subsidies for farmers, the new Farm Bill has shifted to an insurance model[12] when crop losses fall too far.  But crop insurance is tied to protection of the environment. This will mean diverting more farm water to wetlands and rivers and worsening the availability of water for farming.  This is why farmers are saying they don’t want handouts with strings attached that take away more water.

Farmers can choose unsubsidized crop insurance as a way to escape the green strings attached to the crop insurance provision of the Farm Bill.  Mike Wade of the California Farm Water Coalition[13] reports that San Joaquin Valley farmers invested $2 billion in upgraded irrigation systems on more than 1.8 million acres since 2003.

As shown in the table below, the environment is allocated 22.4 million acre-feet of developed water in a dry year in California, but 62.1 million acre-feet of water in a wet year, while agricultural and urban uses remain within a narrow range in absolute numbers.  The environment already gets a disproportionate share of the excess water from wet years.

The major difference between these two bills is that Nunes’ bill would provide regulatory relief and add more water storage for farming and the environment from new-built reservoirs.  Feinstein’s bill would continue the regulatory status quo, but would encourage more flexibility in pumping federal water that might aid farmers.

If the drought persists for years, as occurred from 1987 to 1992[18], there will likely have to be greater reforms and deregulation than what is being offered in the Feinstein-proposed water bill.  However, Feinstein’s bill is likely to prevail because Obama[19] has vowed to kill any Republican-backed water bill.