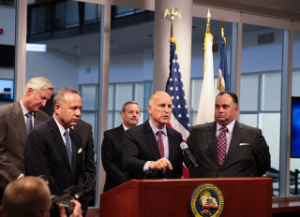 Ninety five percent of the $687.4 million drought aid package, or $647.7 million, comes from the continuation of existing, ongoing programs, many of which began before an awareness of a protracted drought.  The remaining 5 percent of the funding comes from shifting air pollution taxes collected in 2013 under the cap-and-trade air emission program toward water conservation and efficiency projects.

The governor’s drought package is the culmination of a bill, SB731, that Steinberg had been shepherding through the Legislature for some time[5].

As detailed in the table below, the $687.4 million emergency drought bill is funded from the following sources:

Even though there is very little that is new in Brown’s drought bill, it will assure parched small water districts in Central California that funding is potentially available for relief efforts and projects.

Seventeen small water districts[10] in California have been preliminarily identified as possibly running out of drinking water in the next two to four months.  Two of these water districts in Mendocino and Sonoma counties along the Northern Coast are not even connected to the state or federal water projects.

Brown suspended the California Environmental Quality Act in his official emergency drought declaration. But so far he hasn’t made steps to use that power to enlarge Shasta Dam[11] or other projects.

By contrast, in 1994 after the Northridge earthquake, Gov. Pete Wilson[12] invoked emergency powers to repair the Santa Monica freeway in four months.

Today, focus of the Democratic majority in both the governor’s office and the Legislature is to continue the course with mostly existing water conservation projects, not take emergency action through new construction.

Nobody can predict all the impacts of this drought because no one knows its duration, even California’s expert climate change scientists[13].

The total of the bond funding equates to 78 percent of the proposed, and much-criticized, $25 billion Delta Twin Tunnels project[16].  So far, California hasn’t been getting much bang for its buck with conservation projects.

Brown, Steinberg and Perez’s emergency drought bill can’t make it rain. Legislatures and voter initiatives can fund more empty water bonds, but may only anger a public whose money has been taken for a water dousing rod that didn’t work.

Ultimately, Californians will have to vote on whether they want continual conservation policies that make for higher water rates, new reservoirs and tunnels to convey added system water — especially during droughts.