Hoover conference reaches consensus on some areas of pension reform 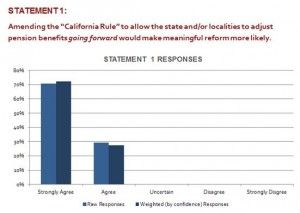 [1]Today the Hoover Institution released a crucial document in California’s debate over pensions, “California Public Pension Solutions: Post-Conference Report[2].” The conference itself took place last October. But its debates and findings now have been compiled for everyone to read and analyze.

The document comes as Gov. Jerry Brown has called for reforming teachers’ pensions — which need $4.5 billion more a year from the general fund to remain solvent — but only after the 2014 election[3].

The conference was co-hosted by Hoover Senior Fellow Josh Rauh; David Crane, who advised former Republican Gov. Arnold Schwarzenegger on pensions; and Joe Nation, a former Democratic assemblyman who has been a leader on pension issues. The latter two are scholars at the Stanford Institute for Economic Poilcy Research[4].

With the hosts, the bi-partisan conference included 39 attendees from across the political spectrum. Others were Democratic Mayor Chuck Reed of San Jose, who is working to put a pension reform initiative[5] on the ballot; and Michael Genest, who served as the director of the state Department of Finance under Schwarzenegger.

“[P]ension benefits for current employees cannot be detrimentally changed, even if the changes are purely prospective….  This Article illustrates that in holding that benefits not yet earned are contractually protected, California courts have improperly infringed on legislative power and have fashioned a rule inconsistent with both contract and economic theory.”

At the conference, three-fourths of the attendees agreed with the statement: “Amending the ‘California Rule’ to allow the state and/or localities to adjust pension benefits going forward would make meaningful reform more likely.” (See chart above.)

If such a change is not made, the only reform possible is what we have seen so far: changing pensions for new hires, which creates a two-tiered system in which old employees enjoy much better pension benefits than newer employees. 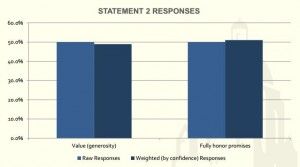 The attendees were evenly divided on whether emphasis on reform should be put on a) the value (generosity) of the pensions — that is, making sure retirees adequately were taken care of; or b) keeping the promises made to the employees.

On the generosity factor, it noted:

But if promises are examined, generosity also actually would be a part of the discussion:

“For example, if California legislators or local officials had to fully fund pension plans, the true cost of such plans would immediately be apparent. This would either result in cuts to other services or re-negotiated benefits. Therefore, requiring that promises are fully honored could also lead to more reasonable benefit generosity.”

The split in the attendees’ positions indicates that this will be a difficult issue to address. But another deep recession, with former taxpayers thrown out of work, could highlight again the high pension amounts. 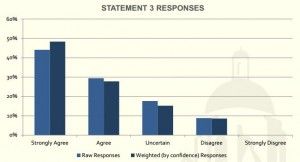 [8]Consensus also was strong for ensuring that pension funds and boards use a “risk-free” rate of return in their projections. Three-fourths of attendees agreed with the statement:

“Requiring state and local pension boards to use a risk-free rate of return, contribute 100% of ARC (actuarially required contributions), and publicly post user-friendly financial statements is a prudent step toward the financial health of pension benefits.”

Even pension funds have been moving in that direction. Just Tuesday, reported the Sacramento Bee[9]:

“The state’s annual contribution to its massive pension fund is about to go up substantially, and much sooner than expected.

“In a victory for Gov. Jerry Brown and his get-tough approach, the CalPERS board on Tuesday set the stage for a rate increase that will cost the state treasury around $400 million beginning July 1. The increase will be phased in over three years and will ultimately cost the state an extra $1.2 billion a year. That will bring the state’s annual payout to CalPERS to around $5 billion.”

That money now will not be available for other general-fund purposes, such as schools. And it’s a mark for those who contended that at least some of the $7 billion from the Proposition 30 tax increase voters approved in 2012 would go toward pensions, not to schools, as was promised.

The major stumbling block to pension reform remains the powerful public employee unions.
But the consensus for reform among the 39 Hoover conference attendees presents, if not a unified front, at least a strong tendency of where reform will have to go once the state’s finances get bad enough that reform becomes mandatory.
Endnotes: