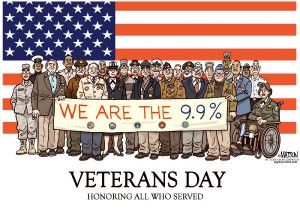 [1]AB 1637 would stamp a “Veteran” designation on the drivers licenses of Californians who served. It’s by Assembly members Jim Frazier, D-Oakley, and Richard Bloom, D-Santa Monica.

According to the Chronicle[2]:

“The hope, Frazier said, is that the license designation under AB 1637 would make it easier for veterans to access federal, state and local benefits, including employment, education, housing, health and counseling benefits by eliminating the ‘impracticality of carrying around official discharge papers.’ The designation, which most states have already added to their state driver’s licenses, also helps veterans receive hotel and retail discounts when available.”

They mean the DD-214 discharge form[3]. That form includes the veteran’s service number, which for more than 40 years now[4] has been the same as the Social Security number. The rise of computers in recent decades has made identity theft easier. So giving out the SS/service number every time a veteran uses his benefits is not a good idea.

The CA driver’s license number is less sensitive. So using it to prove veteran status would mean greater data and identity security.

There are some piddling costs associated with new DMV forms to include the veteran designation. But the bill’s language actually includes charging veterans a fee — in an amount yet to be decided — to the veterans who want the designation on their licenses.

That makes sense. Non-veteran drivers shouldn’t have to pay for it. Veterans defended freedom and defeated socialism.

As a veteran myself — Russian linguist in the U.S. Army, 1978-82, most of it in West Germany defending the Fulda Gap[5] from Red Army tanks — I wouldn’t mind paying the fee.

It seems a minor change in the law for those who protected our freedoms.