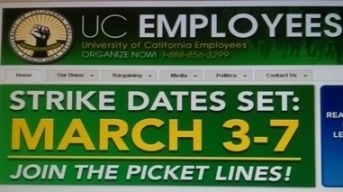 As public opinion in California turns against labor unions[1], few Democrat politicians[2] — most of whom rely on union support to win elections — have publicly embraced workers [3]at the University of California[4]. 21,000 members of AFSCME 3299[5] are planning a five-day strike next month.

The lack of public support for the strike is striking in that the union is arguably the state’s most sympathetic public employee union. The union says that 99 percent of its food workers, custodians and respiratory therapists are income-eligible for some form of public assistance,[6] which it contrasts with the bloated salaries and lavish benefits provided to top UC administrators.

Despite the clear income inequality among the 190,000 faculty and staff at the University of California, a majority of Democrat elected officials have failed to publicly comment on the upcoming strike.

[7]Described by the San Francisco Chronicle as “among the best-off in the country[8],” the 2,300 BART mechanics, custodians, station agents, train operators and clerical staff earned an average base salary of $71,000 per year plus $11,000 in overtime pay[9]. That was before the union received a 15.38 percent pay increase over four years[10] in exchange for increased pension contributions. Previously, BART paid both the employee and employer pension contributions.

“The prospect that well-paid Bay Area Rapid Transit system workers with lavish benefits and little-known perks might inconvenience rich white-collar liberals in the San Francisco area,” wrote CalWatchdog’s Chris Reed[11], “has finally triggered an intraparty battle of the kind that California Democrats have somehow managed to avoid for decades.”

Following that bruising battle at BART, for the first time, Californians have a negative view of organized labor. Last December, a Field Poll found that a plurality of registered voters said that unions “do more harm than good.” Forty five percent of those surveyed viewed unions negatively, a 16-point swing in just two years.

Union approval has even fallen among union households. Thirty one percent of union households[12] have a negative view of unions, a huge increase from the 18 percent result reported in March 2011.

“It seems like they keep winning the battles,” Field Poll director Mark DiCamillo[13] said back in December when the poll was released. “The question becomes, ‘Are they moving the public in the direction where they may lose the war?’”

[14]That first casualty in the war against unions are the low-paid service workers at the University of California. Earlier this month, AFSCME 3299 released a  list of elected officials[15] throughout California who “have united in support of AFSCME 3299’s pursuit of a fair contract settlement with UC.” Just eight state legislators were included on the list.

Even former union members are jettisoning their union credentials. State Sen. Norma Torres[16], D-Pomona, who recently launched her third campaign in three years, wasn’t among the small group of state legislators to publicly back the lowest-paid workers at the University of California. Her absence was noticeable given that she’s a former member of AFSCME. Since being elected to the Legislature, Torres has distanced herself from the union by omitting her union activities from her official biography[17].

[20]“UC continues to disregard the well-being of its lowest wage workers,” said Gonzalez[21], one of the eight Democrat legislators to publicly stand up for UC workers. “It makes no sense for the Legislature to continue to write the UC system a blank check while they continue to increase the wages of those at the very top, while leaving our service workers to be subsidized by taxpayers through safety net programs.”

She added, “All work is dignified and all workers should be accorded respect by our public university system.”

In addition to Gonzalez, Lt. Gov. Gavin Newsom, who serves on the UC Board of Regents, has voiced his support for AFSCME 3299 on various social networks. The union adds that more members are silently with them.

“Whether on picket lines, phone lines, in letters or in statements to the press, the overwhelming majority of the state Legislature’s Democratic Caucus has stood shoulder to shoulder with AFSCME 3299 members throughout their struggle for fairness and dignity at the University of California, and we are deeply grateful for their support,” AFSCME 3299 said in a statement. “We are equally grateful to the members of the GOP Caucus who have stood with us.  Our fight is not a matter of right and left, but right and wrong.”

The eight legislators who publicly back AFSCME 3299