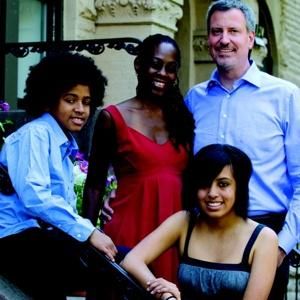 In the run-up to Bill de Blasio’s recent election as mayor of New York City, I lost count of how many times I heard pundits describe the tall Democrat with the mixed-race marriage as offering an inspiring new progressive vision of what America could become.

On Thursday, it became clear that this vision was straight out of the California Democratic Party playbook: side with the interests of veteran, mostly white teachers over the educational needs of struggling, mostly nonwhite students.

Fox News has the details[1]:

“New York City Mayor Bill de Blasio took off the gloves in his battle with education reformers, rescinding an agreement for the city to share space with several public charter schools.

“The move undercuts educators, parents and some 700 students at four schools, including Harlem Success 4, one of the public charter school movement’s top success stories, and two set to open in the fall. While agreements at those schools were rescinded, expansion of a fourth school was also blocked. … De Blasio … is an unabashed critic of charter schools and won election with full-throated support of the United Federation of Teachers.” 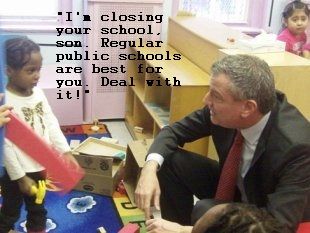 In California, the biggest charter success stories are usually in heavily minority areas. Why? Because they’re served so poorly by a union-enforced status quo that makes adult jobs more important than student progress at regular public schools.

The same is especially true in New York City, which has an odd and highly controversial system of funneling white and Asian students into elite schools that get more resources[2], a system that white New York liberals would see as outrageous[3] if their kids didn’t benefit.

De Blasio is one of such hyprocites. His wealthy contributors’ kids can go to top schools. But the kids of the minority voters who overwhelmingly supported him?

No charter schools for you!

“’This is an unjustified attack on the city’s most vulnerable youth — 93 percent of students in charter schools in New York City are minorities and 73 percent are low-income,’ Bathgate said. ‘These children and parents don’t deserve to have the rug pulled out from under their feet.’

“The teachers union hailed the decision.”

Of course it did.

Will Latino Dems ever object to CTA domination of schools?

I talked to a respected pollster the other day and asked him when fissures finally would open in the California Democratic establishment between the elected Dems who are subservient to the CTA and CFT and the largely-Democratic Latino community, which can’t be happy with the California public school status quo, which is dictated by the CTA and CFT.

He said when a prominent and polished Latino Republican started making the case, then the screwiness of backing Dems would start to sink in with Latinos. May that happen soon, because otherwise nothing will ever change in California’s adult-first public school system.

As for de Blasio, just wait for him to actually voice an inspiring new vision of New York City, much less America. He may look and seem different than Anthony Weiner, Charley Rangel, Mark Green, Al Sharpton and other New York “progressives.” But actions speak louder than height or family history.