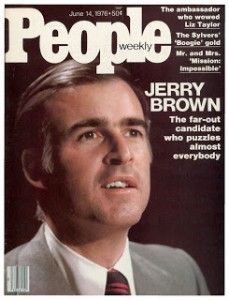 Last Friday, Gov. Jerry Brown[2] officially launched his re-election campaign. Of course, filing the paperwork was a formality for a man who already has raised more than $17 million towards that end.

But Brown’s campaign announcement coincided with what the National Weather Service described as the largest rainfall in Southern California since March 2011.

It may just be a coincidence, our we are underestimating Brown’s political brilliance. The weather, which everyone talks about and no government official can control, might be the only vulnerability to his reelection. In February, a poll conducted on behalf of the Natural Resources Defense Council[4] found that the drought ranked as voters’ top concern.

The drought is scary politically because, although it’s completely out of human hands, it’s not outside of political blame. Rationing, shorter showers, higher water bills and angry farmers are all things that can be — must be — blamed on someone. And governors make for easy targets.

So what’s Brown to do?

Back in January, after dillydallying with an emergency declaration, Brown downplayed[5] his responsibility for the drought, while creating a subtle expectation. “Governors can’t make it rain,” he said on Jan. 9. “But we’ll do everything that is humanly possible to allow for a flexible use of California’s water sources.”

It goes without saying that governors can’t make it rain. So, why say it?

“A politician can do anything he wants so long as he manipulates the right symbols,” Brown said four decades ago, according to J.D. Lorenz’s 1978 biography, “Jerry Brown: The Man on the White Horse[6].”

Brown’s rain quip was manipulating the right symbols. It was picked up by almost every major media outlet. Here are three of the headlines:

All of this inoculated Brown from the real issue. “Politicians certainly can’t make it rain, but they can build the kind of water storage facilities that a growing population in a dry state needs to weather the lack of future rainstorms,” observed UT San Diego columnist Steve Greenhut[10]. “That’s the real issue here.”

Brown continues to be effective because, as Lorenz put it, he cultivates “an ambiance of possibility that gave the viewer space: space to project his fondest wishes onto Jerry, space to identify with Jerry.” Brown’s especially good at cultivating these symbols by a “do and say the opposite” routine.

Kenneth Burke[13] coined the term “perspective by incongruity[14]” for intentionally “violating the ‘proprieties’ of the word in its previous linkages.” The “word” in this case is “Brown.”

“Perspective by incongruity” might as well be the slogan of Brown for Governor 2014.

And for most of this year, he’s been a candidate by not campaigning.

So, why not create an expectation of gubernatorial rainmaking in January, then rain-delay a campaign announcement?

“Don’t think that a paper from the governor’s office is going to affect the rain,” Brown said at the January 9 press conference. Two months later, “Gov. Jerry Brown files papers in Oakland for re-election[18]” on the same day the rains came.

Just as the latest storm wasn’t “a drought-breaker,”[19] a campaign announcement timed with the rain isn’t a campaign maker. However, it creates a rhetorical problem in which Brown can supply himself as the solution. The “Top Story” on the governor’s official website? It’s: “Governor Brown Signs Drought Legislation[20].”

“Like the rain this weekend, this package is badly needed to help mitigate the effects of the historic drought California is facing,” Assembly Speaker John A. Pérez, D-Los Angeles, said in the news release[21] on the announcement. “But also like the rain, we need to see more.”