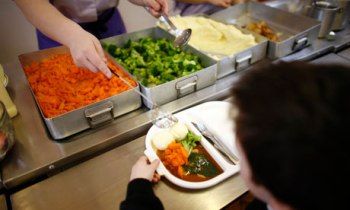 As I have pointed out repeatedly as a blogger and journo, Nanny Staters are bafflingly confident that people like being bullied into living their lives in a way that Nanny Staters approve.

That’s why one of my favorite stories in many years was this December 2011 L.A. Times account[1] of the student revolt over school lunches forced on them by Nanny State food fascists:

“It’s lunchtime at Van Nuys High School and students stream into the cafeteria to check out the day’s fare: black bean burgers, tostada salad, fresh pears and other items on a new healthful menu introduced this year by the Los Angeles Unified School District.

“But Iraides Renteria and Mayra Gutierrez don’t even bother to line up. Iraides said the school food previously made her throw up, and Mayra calls it ‘nasty, rotty stuff.’ So what do they eat? The juniors pull three bags of Flamin’ Hot Cheetos and soda from their backpacks. ….

“For many students, L.A. Unified’s trailblazing introduction of healthful school lunches has been a flop. Earlier this year, the district got rid of chocolate and strawberry milk, chicken nuggets, corn dogs, nachos and other food high in fat, sugar and sodium. Instead, district chefs concocted such healthful alternatives as vegetarian curries and tamales, quinoa salads and pad Thai noodles. ….

A form of massive civil disobedience

“1.6 million students who used to pay for school lunches have stopped buying them, according to a Government Accountability Office Report (GAO).

“GAO noted that part of the decline was due to the ‘challenges with palatability’ of lunches that have to meet new nutrition guidelines issued by the U.S. Department of Agriculture.

“The GAO also noted that among students still getting the school lunches there was ‘plate waste’ — students throwing away some of the food.”

I am sure the public-health martinets will be upset about this, but not me. I like that the younger generation simply defies the Nanny Staters and goes its own way in fighting this petty government tyranny.