Drought: What’s the best way to save water and energy? 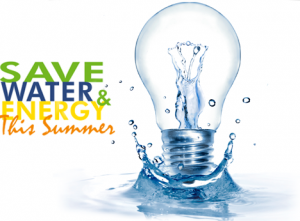 [1]It is being widely touted in the media that water conservation obviously not only saves water but also saves energy[2].  Water is free, but the cost to capture, convey and treat it is not.

It’s worth asking, and answering: Which sector has the greatest potential for water energy conservation?

A statistic that is currently advanced is that energy comprises 80 percent of a municipal water district’s operating costs[3], as Catherine Wolfram and David Zetland wrote in a March 3 op-ed in the Los Angeles Times.

But government statistics show the actual cost is less than half that.

According to the U.S. Environmental Protection Agency, energy costs are about 40 percent[4] of total operating costs for municipal drinking water. The EPA further estimates that only 3 to 4 percent of all electricity consumption[5] in the United States is used to provide drinking and wastewater treatment services.

That means financing the state water project with tax-exempt bonds costs more than the power does.  And power is only 32 percent, not 80 percent, of the costs. Wholesale water rates are based on cost recovery.

A recent study by the Metropolitan Water District[7] reported:

“The California Energy Commission has estimated that the state’s energy consumption related to the conveyance, treatment, storage, and distribution of its water supply is approximately 19 percent of the total statewide energy usage.”

Of that 19 percent, 14 percentage points go to heat, cool, treat, process and pump water on one’s own property.

Another oft-repeated statistic is that agriculture uses “80 percent of all the state’s water.” For example, on Tuesday KCRA.com in Sacramento reported[8] on the meeting in Merced of the Governor’s Drought Task Force. It quoted Felicia Marcus of the State Water Resource Board, who said, “It’s horrifying agriculture uses 80 percent of water in California so they are going to take 80 percent of the hit,” meaning conservation measures.

Not so.  Those who propound this percentage don’t define what they mean by “all.” So, is it:

On average, agriculture uses only 42 percent of all system water and only 17.7 percent of all average annual rainfall and imports, according to the California Department of Water Resources[9].

Agriculture uses 80 percent of water for human use, but not “all state water.”  Here are the numbers and percentages from the California Department of Water Resources so you can see for yourself. Note the red numbers:

Central Valley farmers use way less electricity because they are nearer to large reservoirs and do not have to pay the cost to pump water over the Tehachapi Mountains, as do cities in Southern California.

Again, water is “free,” but capturing, pumping, conveying and treating it is not.  So farmers typically pay as little as $80 to $280 per acre-foot for water, but Southern California cities pay up to $340 per acre-foot for raw, untreated water[11].

Urban retail water customers pay even more for water because it has to be stored and treated. That means more use of electricity. The main price difference is the cost of electricity to pump the water.

The Center for Irrigation Technology at Cal State University, Fresno estimates that the potential for water-use efficiency from agricultural water is a paltry 1.3 percent of the current amount used by farmers.

And the potential for such water-use efficiency is only 0.5 percent of California’s total yearly use of 62.7 million acre-feet of water[12].

Changes in irrigation practices, such as drip irrigation, can shift water within a region, but generally do not create more water outside that area.

Oddly, where most of the water is allocated in California is to the environment, not farming or lawns and swimming pools.

When we think of “environmental water,” we think of water flowing by gravity in natural rivers, streams and lakes.  But in a modern technological society, water has to be captured in storage reservoirs to prevent flooding and released to rivers for fish runs.  In other words, water for the environment also has to use electricity.

The San Joaquin River has a 60-mile stretch where the river runs dry during droughts[14] because the riverbed is at a higher elevation.  The present solution to this hump in the river that keeps salmon from running to the ocean is to flush the river with huge amounts of water to get the fish over the hump.

This is inefficient and takes excessive amounts of water away from farmers that they have to pay for.  A possible solution would be to pump water over the hump, which would save water but run up the electricity costs for environmental water.  It would cost about $1 billion[15] or higher to lower the riverbed to create a sort of Panama Canal for fish.

Where California could get its greatest water savings is through quantification and greater efficiency of environmental water, not agricultural or municipal and industrial water.  Farmers have already spent $2 billion[16] since 2003 on water conservation improvements. And since 2000, California voters have approved five water bonds totaling $18.7 billion mainly for urban water conservation efforts[17].

A 2004 report, “Considering Water Use Efficiency for the Environmental Sector”[18], by the University of California, Berkeley, indicates that future water conservation efforts should be targeted at water allocated to the environment.

So, it’s clear that environmental water is the sector where the most energy savings most could be found.

As Mike Wade[19] of the California Farm Water Coalition sums up the issue:

“More than 3 million acre-feet of water that once served farms, homes and businesses has been ‘re-prioritized’ each year for environmental purposes. Unfortunately, unlike urban and agricultural public water agencies, environmental uses are not required to meet any sort of efficiency standards.

“Taxpayers should be concerned that public funds and water resources used for environmental restoration activities may not return the value to the state that they expect. Absent efficiency standards, even the most rudimentary ones, a tremendous amount of water and money can be wasted with no accountability.

“As the State Water Resources Control Board considers new flow standards on the Tuolumne River, farmers in the Turlock and Modesto irrigation districts and others stand to lose almost one-third of the surface water that they depend on to irrigate their crops. Any benefits that water will have for the environment are undetermined. Environmental water use efficiency standards are long overdue.”