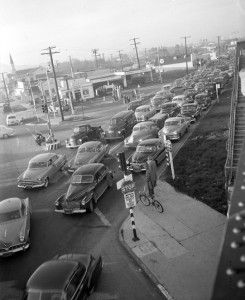 [1]California has the highest income, sales and gas taxes in America — and the worst roads. Reported CBS Los Angeles:

Los Angeles topped the charts for the most gridlocked city in 2013, according to the annual Traffic Scorecard, which is complied by traffic information provider INRIX.

Drivers in LA wasted an average of 64 additional hours behind the wheel due to traffic.

Motorists also experienced longer backups than drivers in dense cities in the United Kingdom, France, Germany, Belgium and the Netherlands, the study found.

Other California cities to make the top ten list include San Francisco (#3) and San Jose (#7).

Last month, Caltrans named Interstate 5[2] through Los Angeles as the worst freeway in California for traffic.

In 2012 alone, vehicles spent 6.6 million extra hours on that road due to heavy traffic, which was defined as vehicles going less than 35 mph.

Let’s see. 6.6 million hours times an average wage of about $18 an hour equals $119 million lost just from traffic jams on the 5 “freeway.” Exact numbers aren’t available, but if all the other clogged “freeways” in the state were added, the cost would be several billion dollars a year.

This is lost productivity in a state that has seen little productivity gain in recent years. Now, instead of building roads to keep our people moving to prosperity, Gov. Brown and the state leadership are keen to build an even more wasteful high-speed rail system that isn’t needed because we already have airplanes.

If you wonder why state growth is so slow, a good part of the lost growth is stuck in a traffic jam.