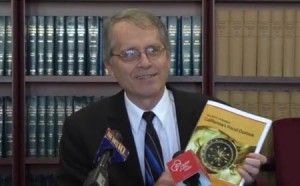 This Los Angeles Times story[1] should infuriate anyone familiar with Gov. Jerry Brown’s claims that the state is on firm ground financially — and absolutely appall anyone who knows that alleged watchdog Mac Taylor of the Legislative Anayst’s Office gave Brown cover for his myths:

“The cost of providing healthcare to retired state workers is $64.6 billion more than state leaders have set aside to pay, an increase of $730 million from the previous year.

“The new numbers, calculated as of last June, were released by state Controller John Chiang on Thursday. …

“State workers become eligible, after 10 years on the job, to receive taxpayer-funded healthcare for life. The state picks up an even bigger share of the cost after 20 years of employment.

“California pays the cost of retiree healthcare directly out of the annual budget. That’s much different from how it handles state pensions, which are largely funded by investment returns on gigantic pension funds.”

Now let’s revisit[2] what Mac Taylor said last November: At a legislative hearing, he opened his analysis of the state’s fiscal picture by declaring there was a“strong possibility of multibillion-dollar operating surpluses within a few years.”

Yeah, if you ignore CalSTRS’ gigantic and growing shortfall, and unfunded retiree health care, than the state is doing just fine.

And if you leave out what happened that one summer in Hiroshima and Nagasaki, Japan didn’t suffer too much in World War II.

Incredible. How does Mac Taylor sleep at night? He’s a civic arsonist.