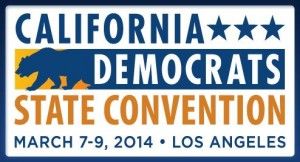 Although Democrats face two scandals involving members of the state Senate, the party is well positioned for the 2014 campaign cycle. The party controls every statewide office and both houses of the state Legislature. Overall, the party has an advantage in voter registration of 2.6 million[2] more than Republicans.

Gov. Jerry Brown is expected to cruise to reelection and could once again sweep Democrats into all of the statewide constitutional offices. The Democratic advantage is strongest in campaign fundraising. As of the last reporting deadline, 10 Democrat campaign committees had a collective $40 million in cash on hand.

And those big fundraising warchests could be put to work for the state’s Democratic Party.

Those 10 Democratic campaign committees could easily collect a few hundred thousand dollars more per year, if they simply managed their money better. And, no, this hot tip isn’t another scheme from Kindee Durkee.

Without dialing for dollars, Democrats could earn interest on their multi-million campaign war-chests. Under state campaign finance guidelines, campaign accounts can be invested in interest-bearing accounts. A few Democrats, such as State Treasurer Bill Lockyer, have figured this out. Last year, he earned a little more than $5,000 in interest.

If California Democrats wanted a more liquid investment, they could still earn interest from high-yield online savings accounts. According to the personal finance experts at Nerd Wallet, several banks are currently offering 0.90% APY rates for online accounts. At that rate, Democrats could earn a cool $30,133 per month, or $361,605 per year in free money.