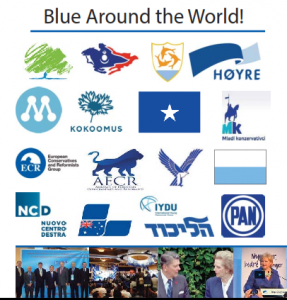 [1]At this weekend’s state party convention at the Hyatt Regency San Francisco Airport[2], a group of influential California Republicans has an odd request for delegates: help turn California blue.

“Around the globe, blue is identified with conservative, free market parties, while red is identified with social democratic parties,” points out Shawn Steel, a former chairman of the state party who now serves as its representative on the Republican National Committee. “It is why conservative-leaning Democrats in Congress were called ‘Blue Dogs.’ Everyone knew what it meant.”

Steel is among a group of Republicans that have introduced a resolution[3] calling for the California Republican Party to adopt blue as its official color in branding materials. The informal coalition of “Republicans, Red No More[4]” says that it’s time to conform to proper historical and international standards for political ideology, correct a 14-year-old mistake by the mainstream media and, in the process, confront “the idea of a hopelessly divided nation.”

The group has some high-profile backers, including two members of California’s congressional delegation.

“Should the Republican Party choose its own principles and symbols, or should we let the national media do that for us?” asked Rep. Doug La Malfa, R- Richvale, in an email to delegates[5]. “Well, the answer should be obvious.”

Rep. Dana Rohrabacher, R-Huntington Beach, pleads, “Will you join with me in taking back our Reagan Blue?” He was a speechwriter for President Ronald Reagan.

No Red States and Blue States

Think the whole color conundrum is trivial? Wayne Johnson, one of the state’s most successful political consultants, believes that the media’s emphasis on red states vs. blue states increases public cynicism about the political process.

“The very notion that there are ‘Blue States’ and ‘Red States’ not only signals to people that their votes are a meaningless formality, it also feeds the idea of a hopelessly divided nation,” said Johnson, the president of The Wayne Johnson Agency[6]. “Both assumptions also happen to be profoundly untrue. There isn’t a state in the union that couldn’t go Republican or Democrat in any given election given the right candidate and the right timing and issues.”

Last month, California Republicans proved that to be true: the right candidate, Councilman Kevin Faulconer, with the right timing, a special election, won a decisive victory in San Diego by focusing on right-of-center issues. Without compromising the party’s core conservative values, Faulconer sought to minimize the divisive red vs. blue rhetoric and build on a “theme of inclusion.” And as the UT San Diego noted[7], “He even used blue campaign signs.”

Faulconer’s blue signs were a departure from recent norms, but not historical traditions. Dating back to at least the 19th century, the United States has followed the international standard of associating blue with right-of-center political parties and red with causes that lean left. That tradition, Johnson says, “reached its zenith in 1980 with the landslide election of Ronald Reagan.”

[8]“In 1980, David Brinkley described the nearly all-blue map of the Reagan landslide as a ‘suburban swimming pool,’” said Johnson.

That all changed in 2000, when a trifecta of media powerhouses flubbed the traditional political colors. Among a slew of mistakes in its election night coverage[9], NBC News used red to fill in the map of states won by George W. Bush and blue for those won by Al Gore. Two days later, the New York Times and USA Today repeated those colors in their first color-coded maps of the vote. The graphics editors for both papers have said there wasn’t much thought put into the decision. However, the ensuing drama and Supreme Court case helped solidify the colors in the public’s mind.

“For weeks, the maps were ubiquitous,” observed Jodi Enda in her history of the controversy for Smithsonian Magazine[10]. “Perhaps that’s why the 2000 colors stuck. Along with images of Florida elections officials eyeballing tiny ballot chads, the maps were there constantly, reminding us of the vast, nearly even divide between, well, red and blue voters.”

Elsewhere around the world, from the red Social Democratic Party of Croatia to the blue Tories in the United Kingdom, countries that never experienced the mainstream media mistake follow the historical norms.

Ilkka Ahtokivi, president of the International Association of Political Consultants[11] and a prominent European consultant, says that the United States stands alone in its political colors.

“Blue is often considered the traditional color of center-right and free-market parties around the world,” said Ahtokivi, where the conservatives in his home country, Finland, have been using blue since its foundation in 1918. “It has always seemed counter-intuitive that in the U.S. the center-right party is assigned the color red, while the center-left party is assigned the color blue.”

As American parties have departed from the international norms in color usage, there’s arguably been a decline in party ties with other nations.

“It was during the 1980s that our relationships with conservative and free-market parties really began to blossom,” said Johnson, who has served as an American representative on the Board of Directors of the IAPC. “The close ties between Reagan and Margaret Thatcher strengthened the association of American conservatism and Thatcher’s Blues.”

But, it isn’t just the prospect of global cohesion that has some California Republicans seeking to go from red to blue. There are also subtle consequences as the state party courts new immigrants. According to a report released last month by the U.S. Census Bureau[12], a quarter of the nation’s foreign-born residents live in California. That’s 10.2 million Californians who were born in another country, where blue means conservative and red means liberal.

Steel, who backs the change from red to blue, has led the party’s effort to expand political support among minority voters, especially Asian Americans. “They should be coming to our party en masse,” Steel told the Los Angeles Times[13] last December.

[14]For new voters that hail from anywhere else in the world, it becomes an issue of clarity.

“Let me begin by saying that the symbols we choose as a party pale in comparison to the principles we embrace,” Steel wrote in his message to delegates. “Yet, symbols are nevertheless important. It is a visual shorthand that people around the globe understand.”

A decade ago, political analyst Clark Benson similarly argued that it’s an issue of clarity.

Not everyone is optimistic that the colors can be corrected.

Glen Bolger, one of the Republican Party’s leading political strategists and pollsters, defied the dominant color choices for years. Until 2012, he used red for Democrats and blue for Republicans in his presentations, but finally threw in the towel due to the frequent confusion.

“I don’t know that it will ever go back,” said Bolger, a partner and co-founder of Public Opinion Strategies.