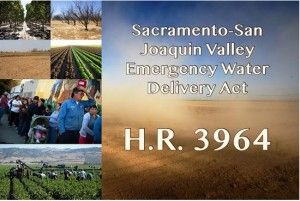 [1]Crises commonly produce compromise. That seems to be happening in the U.S. Congress with solutions to California’s drought. In particular, Sen. Dianne Feinstein appears to be moving away from her San Joaquin River Restoration Act of 2009[2], which was a response to a 2006 court decision and gave priority to salmon runs over water for farming.

A March 10 editorial[3] in the Fresno Bee paraphrased her comments to the paper’s editorial board:

“It is time, in light of climate change, Feinstein said, to ‘reassess’ the $2 billion plan that would revive salmon runs on the San Joaquin by rebuilding the 153-mile stretch between Friant Dam and where the Merced River empties into the San Joaquin.

“This is significant because Feinstein has been a strong river restoration advocate. She, along with former Rep. George Radanovich, was a key figure in pushing negotiators forward in the 2006 settlement of a long and bitter federal lawsuit filed by environmentalists over river diversions to farmers.”

And with Fresno in the heart of California’s farming country, the Bee’s editorial board also has been persuaded to change its stance. An Oct. 28 editorial[4] in the paper didn’t foresee any problems with water releases from Friant Dam for fish. But its new editorial on March 10 wrote:

“The Editorial Board has championed the river’s restoration. However, we concur with Feinstein.

“The project has ballooned in costs. Deadlines have been repeatedly missed on this massive, unprecedented and unpredictable project. Indeed, the schedule for fully restoring the salmon runs was pushed back three years in mid-2012.”

A typical response from the farm community came from the activist group Families Protecting the Valley:

“Is it possible that Senator Dianne Feinstein is starting to see the San Joaquin River Restoration project as the unrealistic dream that it really is?… There is no money, no promise of funding.  Yet, water has needlessly been sent down the river instead of to farms. Thousands of acre-feet [of water] could have been saved just in the past few months, but the restoration was ‘off the table’ for re-negotiation according to Senator Feinstein.”

“Today’s bill is another irresponsible proposal that puts politics ahead of the needs of California, and candidly, it’s very disappointing. … This bill is disingenuous, it is irresponsible and it is dangerous. I truly hope Valley farmers speak out against this ugly example of politics as usual and demand that Valley Republicans quit the games and fulfill their responsibilities as legislators.”

Pretty tough words. But since then, the drought only has worsened. President Obama toured the drought area[6]. And the November election, with Democrats worried about losing House seats from California, approaches ever nearer. Indeed, just yesterday Democrats’ plight became more critical as Republicans won[7] an election for an open House seat in Florida.

So it’s not surprising that Feinstein and other Democrats want to advance compromise solutions to the drought that put them in good light with farm voters.

Compromise 1. The San Joaquin River has a 60-mile stretch where the river runs dry during droughts[8] because the riverbed is at a higher elevation. This hump in the river keeps salmon from running to the ocean. The present solution is wasteful: flushing the river with huge amounts of water to get the fish over the hump.

Feinstein’s 2009 San Joaquin River Restoration Act required lowering the riverbed to create a sort of Panama Canal for fish at a prohibitive cost of $1 billion[9] to $2 billion. It has not been built. The project is a literal example of the old saying, “In California water runs uphill toward money.”

Compromise 2. Water savings could be advanced through the quantification and greater efficiency of environmental water, not agricultural or municipal and industrial water.

Check out this Water Balance Table[10] from the Department of Water Resources:

If a bit more environmental water were reallocated to agriculture in dry years, the crisis could be alleviated.

Compromise 3. Discussions could be started on the $102 million collected from farmers under the San Joaquin River Restoration Act of 2009 to build infrastructure to replenish their lost farm water allocations, but which never was implemented.

Compromise 4. A “fail safe” drought planning principle[12] could be adopted that puts pre-mitigation of lost farm water before water diversions for fish. Otherwise, when droughts hit, farmers are decimated.