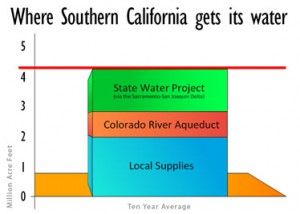 [1]During the first week of March, Mother Nature herself violated numerous calls by Gov. Jerry Brown[2] and municipalities [3]for home owners to conserve water — by showering home lawns for several days.

The green grass in front of your home is coming in for the lion’s share of the blame for the drought. For example, according to a study[5] by policy experts Ellen Hanak and Matthew Davis, “[L]andscaping typically accounts for at least half of all residential water use in inland areas.”

However, California is a gigantic state with many different topographies that use water differently.

Notice the above California Water Balance Table from the Metropolitan Water District of Southern California. It shows urban uses of water comprise only 11 percent of all the system water on average and 8 percent in a wet year.

Landscaping is assumed by many to use about 70 percent of all urban household water.  But that number comes from the California Urban Water Conservation Council allocation of 70 percent to landscaping use[6] (see page 10).

In fact, the best study we have is by the California Urban Water Conservation Council of 2,500 households in San Diego in 1992 (Excel spreadsheet; see Item 2b[7]). It showed that landscaping used only 44 percent of household water.

That’s why it is wet year water that has to be stored for droughts.

Is it worth spending $10,000 to $20,000 ripping out the grass and putting in a “drought garden” in front of a typical Southern California home?

Water transferred from the High Sierras to Southern California cities just shifts water from one ecology to another. Which ecology should get the water is a matter of cultural and political values, not science or rational drought policy.

Should Pasadena be allowed water for its rose gardens[8] for its famed Rose Parade?  Or should that water be “conserved” to grow Blue Oak trees[9], California Flannel Bushes[10] and California Blue Eyed Grass Flower[11] in the Sierras?  Ironically, these trees, bushes and flowers will be irrigated anyway by rainfall. And some of that same High Sierra water eventually will flow to cities for reuse for urban forestry and wildlife via the California Aqueduct[12]. 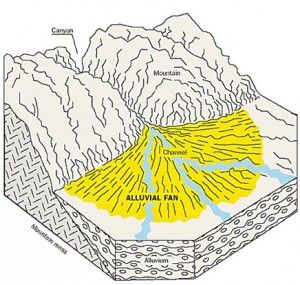 [13]Foothill cities should water lawns in a drought

Conservation probably does matter in cities in areas of clay, loam or sandstone soils[14].

However, although it is counter-intuitive, watering your lawn actually may help relieve the drought if you live in a community located on the sandy soil of an alluvial fan near foothills that partly depend on imported water.

That’s the position of David O. Powell, P.E.,[15] former head of the San Diego Office of the Department of Water Resources and chief planning engineer with Bookman Edmonston Engineering. He currently resides in Pasadena.  In an email to CalWatchdog.com, Powell estimated that about 15 percent of all landscaping water recharges underlying groundwater basins each year.  So without recharging water basins each year with imported landscaping water, eventually the basin will drop below what is called its “safe yield.”[16]

Such is the case if you live in the City of Downey, which is 100 percent reliant on groundwater, has sandy soils from the San Gabriel River and is located on top of the Central Water Basin. Water conservation wouldn’t recharge the underground water basin. That is because watering lawns would just be recirculating Downey’s groundwater.

If your city is partly dependent on imported water and has sandy soils on top of a groundwater basin, watering lawns with imported water recharges the basin.

Admittedly, conspicuously watering lawns in a drought creates a perception problem that water is being “wasted.”  Sociologist W.I. Thomas wrote, “If a situation is perceived as real, it is real in its consequences.”[17]  In California, inaccurate coverage of water use has led to a “one size fits all water policy of water conservation” in educating the public about water policy.

To better manage droughts, urban California needs more accurate perceptions of the situation of where water conservation can help and where it cannot.  Pulling up lawns in foothill communities with alluvial soils that rely on imported water is counterproductive during a drought.