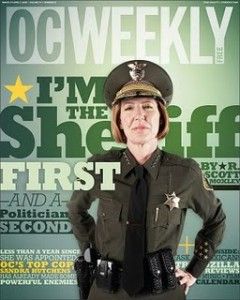 [1]Orange County Sheriff Sandra Hutchens commendably is expanding [2]the ranks of those able to get conceal-carry permits. This follows a ruling by a three-judge panel of the U.S. 9th Circuit Court of Appeals that the Second Amendment right to “keep and bear arms” includes the word bear.

When Hutchens was appointed sheriff in 2008[3], she succeeded Mike “America’s Sheriff” Carona, who had been convicted in federal court on corruption charges.

Hutchens unfortunately tightened the county’s conceal-carry policy, which Carona had loosened, in part to give permits to his cronies.

Hutchens tightened the policy even though a) Orange County is a conservative county whose populace favors gun rights. And b) the evidence now is overwhelming that allowing conceal-carry by honest citizens actually cuts crime[4]. The reason is that criminals don’t care about such laws, so the laws only are followed by law-abiding citizens. That leaves citizens unarmed when under assault by armed thugs.

The 9th Circuit’s panel’s decision is under appeal. But even if the decision is overturned, Hutchens could continue her policy. That’s because, under California law, it is county sheriffs who hand out conceal-carry permits at their own discretion.