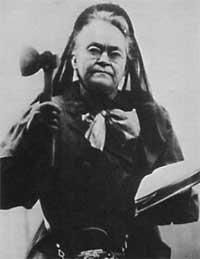 [1]It used to be liberals strongly favored personal liberty. Some still do. Many don’t.

The state’s senior senator told The Associated Press in a telephone interview that one of her concerns is the potential for pot-impaired drivers to take to the road. Feinstein said she hopes California declines to join Colorado and Washington in approving the sale of marijuana for recreational use.

“The risk of people using marijuana and driving is very substantial,” she said.

The risk of driving while drunk is even more substantial, about a third of all fatalities[3]. So if Feinstein’s logic were followed, we would enact a new alcohol Prohibition, as existed almost a century ago. Battalions of new Carrie Nations (pictured above) would fan out across the country, smashing booze barrels and closing down saloons.