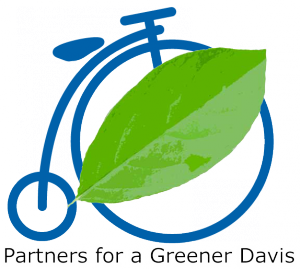 [1]The city of Davis is renowned for its liberal local politics, green bicycle paths, local farmer’s market, Whole Earth Festival, percentage of those with graduate degrees, and the campus of the University of California, Davis. The city is about the last place in California one would expect opposition to the city creating its own, green-oriented municipal electric utility to replace ownership by the private Pacific Gas & Electric.

However, a new poll sponsored by the International Brotherhood of Electrical Workers found a plurality of Davis voters, 47 percent, opposed[2] creating a municipal electric utility. The poll was conducted by the independent Fairbank, Maslin, Maullin & Associates.

“Davis voters see through the false promises. Politicians promise green power at not greater cost.  But voters understand that’s just empty rhetoric. Davis deserves safe, reliable power that is truly green.  This plan is not it, and voters know it.”

FMM&A, as the polling firm calls itself, sent the union a memo concluding (boldface and underline in original):

“Overall, the survey found that voters are satisfied with the services provided by PG&E, and are strongly inclined to oppose a proposal for the City of Davis to take over the electric utility. An overwhelming majority of voters are satisfied with PG&E – particularly with the utility’s reliability. Voters are not confident that the City of Davis could do a better job, and perceive PG&E as both the better service and also more likely to achieve clean energy goals. When asked directly, a plurality of voters would oppose a City of Davis takeover of the electric utility, and anticipate that such a takeover would have a negative impact on the City budget, electricity rates, and service reliability.”

Of course, an opinion poll funded by an electrical workers’ union whose members work for PG&E must be scrutinized more deeply.  The poll was conducted of 400 telephone interviews with voters in Davis, with a sampling error of 4.9 percent at a 95 percent confidence interval.

According to City-Data.com, 65 percent of voters in Davis in 2012 voted for Barack Obama for president. So like most university towns, this is a heavily liberal, Democratic city. Here’s the breakdown of opposition to the city electricity takeover: 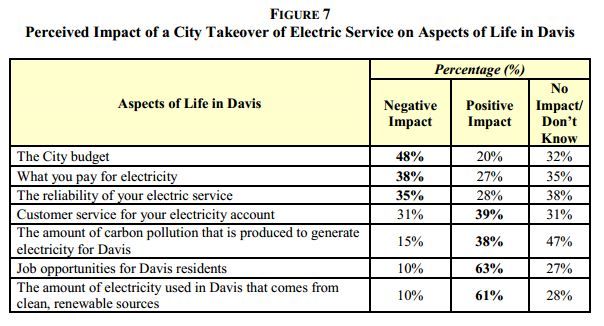 In short, even liberal voters who strongly backed President Obama and seek a cleaner environment also vote their pocketbooks. It’s something the politicians should take into account.