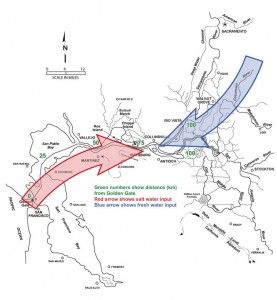 [1]California climatologists such as Jeffrey Mount[2], Peter Gleick and the California Climate Change Center[3] have predicted for some time an apocalyptic disaster in the Sacramento Bay Delta from a rise in sea level and flooding due to global warming.

But the real world disaster about to hit the Delta is coming from the reverse of the climatologists’ prophecies.  Ocean saltwater is about to contaminate the Eastern portion of the San Francisco-San Pablo Bay due to a drop in fresh water levels and lack of water flows, although the temperatures have been warm.  By about June of this year, the lack of freshwater inflows to the Delta due to drought and low reservoir levels would allow an ocean saltwater surge to contaminate the largest source of California’s drinking water and its largest estuary.

On March 14, Capitol Radio interviewed Paul Helliker[4], Deputy Director of the California Department of Water Resources about the expected saltwater surge in the Delta.  The interview was about three temporary dams having to be put into place to save California’s Delta drinking water supplies from being contaminated from salt by seawater intrusion. As Helliker summed up the possible disaster, “If salinity increases significantly in the Delta then the water will be unusable.”

Without enough flow of fresh water released from reservoirs to hold back brackish ocean water, a large amount of California’s largest drinking water resource, the Delta, would be lost.  It would be a statewide disaster that would negatively affect California’s economy.  Some 25 million people and 3 million acres of farmland[5] depend on Delta water. The Delta has a $1 billion water-related recreation economy comprised of 8,000 jobs.  South of the Delta is a $25 billion annual farm economy.

The mixing zone for salt and freshwater in the San Francisco-San Pablo Bays is called “X2”[6] and is usually located between the cities of Pittsburg and Antioch in the San Francisco Bay.  In a wet year, the X2 line is pushed westerly toward the ocean by freshwater; in a dry year it is pushed easterly by saltwater toward the inlets of the Sacramento and San Joaquin Rivers.

A false dam for a false river 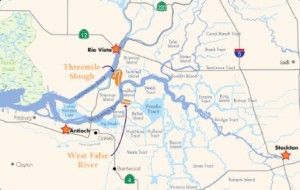 A critical choke point is False River near the inlet of the San Joaquin River at the East end of the Bay.   If seawater penetrates past this point, then river water becomes contaminated.  The proposed False River temporary dam would serve as a barrier to repel saltwater.

The two critical points for temporary dams north of the Delta are Sutter Slough and Steamboat Slough.  The temporary dams at these locations would help to keep fresh water from the Sacramento River flowing to push seawater out toward the ocean.

False River probably gets its name from the fact that it branches from the San Joaquin River just at the place where the river flows into the Bay.  It is not the true river.  False River runs through Franks Tract, a sort of false island recreation area that alternately becomes submerged in wet years and floats in dry years.  Placing a gate or dam at False River[8] has been proposed since the 1930s.

According to Helliker, temporary dams were successfully used during the drought of 1976-77, at the time of Jerry Brown’s first term[9] as governor.  And the idea of temporary dams was a part of Brown’s emergency drought declaration[10] in January of this year.

The plan to build a temporary dam would be accomplished by a crane placing rocks from a barge.  The temporary rock dam would have to be removed later.

As an example of how the temporary dams could be done, the makeshift Hills Ferry Barrier[13] is erected seasonally to prevent salmon in the San Joaquin River from following false migratory paths from freshwater streams to the ocean and back, as shown in the following picture: 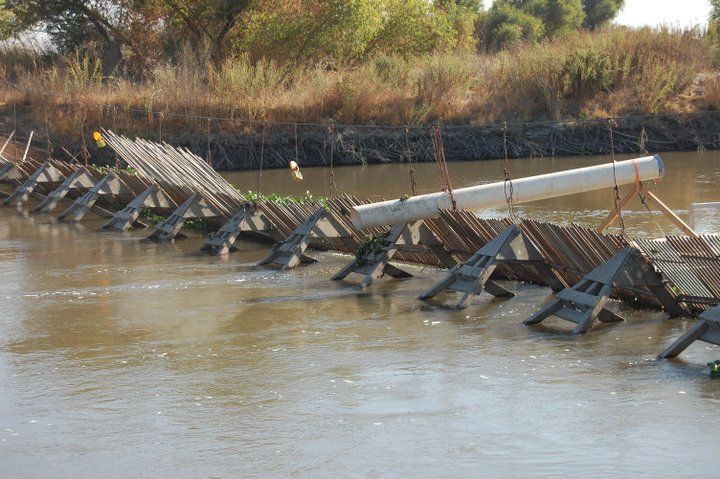