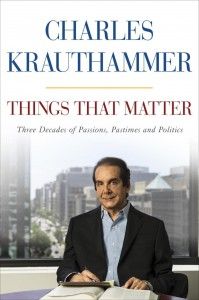 [1]Columnist and Fox News commentator Charles Krauthammer pulled the plug on Obamacare in his keynote speech March 7 for the Pacific Research Institute’s Second Annual Baroness Thatcher Dinner[2]. It was given before 450 local and state community and business leaders at the Island Hotel in Newport Beach, including former Gov. Pete Wilson and former SEC Chairman Chris Cox. PRI is CalWatchdog.com’s parent think tank.

“The reason that Obamacare is going to fail, it is not just a symbol of this radical liberalism, it is the embodiment of it,” said Krauthammer, who also is a medical doctor and psychiatrist. His column runs in the Orange County Register[3] and his new book, “Things That Matter: Three Decades of Passions, Pastimes and Politics,[4]” has sold more than 1 million copies.

“It is not just an aspiration, they finally achieved something they wanted to do for a hundred years, and they finally enlisted the United States in the roster of enlightened countries that have nationalized health care. Now everybody can see it and everybody can feel it. Five million Americans have already lost their insurance over this. Others have been thrown into all kinds of disarray. And health care itself is in disarray.”

Although quipping that after the Republicans lost the presidency in Nov. 2012 he had to put on his psychiatrist’s hat and prescribe anti-depressants to some in the GOP, Krauthammer remained optimistic, “We have institutions like PRI that can prepare, the same way the think tanks in England prepared for that generation [of Baroness Thatcher]. Now it turns out that everything that you predicted here at PRI about Obamacare is coming true. And we also have the fact that we have a center-right country.”

Before Krauthammer spoke, PRI Chairman of the Board Clark Judge brought up how PRI President and CEO Sally Pipes “is the one who has formulated the alternative to Obamacare that almost surely will be enacted the next few years. Sally has been a national force, and with that PRI.” Pipes, who has headed PRI for more than two decades, is the author of three books critiquing Obamacare, most recently, “The Cure for Obamacare[5].”

Judge also praised the work of Lance Izumi, PRI Koret senior fellow and senior director of education studies, in particular for the film, “Not As Good As You Think: The Myth of the Middle Class School[6].”

And Judge commended CalWatchdog.com Editor-in-Chief Brian Calle and Managing Editor John Seiler for reversing “the decline of reporting in Sacramento.  They have broken story after story. They are bringing investigative reporting back to California.”

The dinner gave its Second Annual Baroness Thatcher award, named after the late prime minister of the United Kingdom, to William E. Simon, the Republican nominee for governor in 2002. The award was presented by James Piereson, the president of the William E. Simon Foundation.

Piereson added that Simon is guided by “the same philosophy that guided Margaret Thatcher’s life and animates PRI: Freedom, individual responsibility, and the vision of America as that city on a hill.”

Accepting the award, Simon said, “I’d like to share a few thoughts about Baroness Thatcher, about whom this award is named, and our host, the Pacific Research Institute, as well as our 40th president,” Ronald Reagan. “PRI celebrates its 35th anniversary as a champion for free-market solutions. And there’s a link between Baroness Thatcher and PRI, thanks to a very successful capitalist by the name of Sir Anthony Fisher…. He was determine to fight socialism.”

Simon pointed out how Fisher was encouraged by his friend, Nobel economics laureate Friedrich Hayek, to found free-market think tanks. The first was the Institute for Economic Affairs in London. More than 150 have followed, one of the first being PRI in 1979, the same year Thatcher took up residence at No. 10 Downing St. as Britain’s prime minister. Simon quoted Thatcher, who said, “First you win the argument, then you win the vote.”