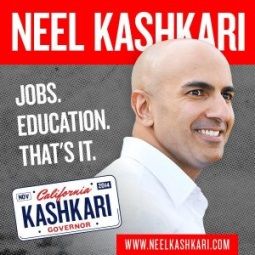 [1]Neel Kashkari is running for governor under the slogan, “Jobs. Education. That’s it.” The Republican businessman today released his detailed, 26-page plan for the first part of that promise: Jobs. The title is, “Neel Kashkari’s Jobs Plan: Rebuilding the Middle Class[2].”

The plan begins by attacking Gov. Jerry Brown for not doing enough for the middle class:

Kashkari’s plan also doesn’t finger the main culprit in both the demise of the middle-class and the rise in the poverty rate: sky-high housing values. In 1970, housing cost about the national average; but California’s moderate climate meant less spent on heating and air conditioning. By contrast, today the Orange County Register reported[3] that O.C. now has the fourth-highest number of million-dollar home values among American counties, at 24 percent.

Which means three of the top four counties in the Million Dollar Home Club are in California. The other three are: San Francisco, 43 percent of homes; Fairfield, Conn., 30 percent; and San Jose, 26 percent.

Not much can be done about this because not just liberals and environmentalists would oppose loosening housing laws to allow for more construction. So would Republicans in the middle-class who want to keep their property values from plummeting if new homes were built in vast amounts.

Moreover, Senate Bill 375[4] was signed into law by the Republican Schwarzenegger in 2008. It makes it state policy to squeeze more people into high-rises and out of suburban, middle-class homes.

And throughout the past 40 years decried by Kashkari, both houses of the Legislature have been completely controlled by Democrats, excepting only a single year, 1996, when Republicans controlled the Assembly[5]. That isn’t going to change.

“Support safe development of the Monterey Shale Formation.”[6] He cites the 2013 USC study [7]on what a boon this would be to California, including the creation of 3.3 million new jobs, $223 billion added to the economy and $25 billion more for the state treasury. He writes, “While fracking has been safely conducted in California for decades, the opportunity presented by the Monterey Shale Formation presents a new frontier for in-state oil extraction.” And he charges, “Governor Brown has shown no sense of urgency to unleash energy sector jobs and appears content with the status quo.”

The problem will be that Brown anticipated such a challenge and last year signed into law SB4[8], by state Sen. Fran Pavley, D-Calabasas, that expands fracking. Kashkari’s plan would do more. But in a debate, Brown could respond that he is advancing fracking, but in a responsible way that protects the environment. Brown would charge that Kashkari’s plan would help oil companies at the expense of the environment.

“Create an environment where small businesses and farms can grow and put people back to work.” Businesses continually complain California’s state and local red tape is even a greater impediment to jobs creation than high taxes. Brown has tried to pooh-pooh governors such as Rick Perry of Texas coming here to poach jobs.

“Neel will reform the regulatory system by spearheading a law that will require a 10-year rolling regulatory sunset whereby all regulations are evaluated in light of changing economic conditions, evidence that the regulation is ineffective, or at the emergence of a superseding federal regulation that may require better coordination.”

That might require a voter initiative to enact. But this seems like a plank that will resonate for Kashkari, especially among the Latino, Asian and African American small businesses folks the GOP is trying to attract.

The rail project is impracticable and could be thrown out in court, as Kathy Hamilton has reported [10]on CalWatchdog.com. California voters also increasingly are opposing it[11]. The train is a boondoggle that could help Kashkari’s campaign.

Diverting money instead to water-storage projects also is something that will attract voters as the drought continues. So far, Brown’s response to the drought has been to declare an emergency and propose a $687 million plan [12]for aid and conservation.

“Adopt Flex Time rules to allow greater cooperation between employers and workers.” This is a good idea. California mandates overtime (with some exceptions) for any hours worked beyond eight hours a day. Most states mandate overtime based on a 40-hour week, which allows employers and employees more flexibility.

For example, a parent might want to work six hours on Monday to attend a child’s soccer game, then make up for it with 10 hours on Tuesday. In California, the employer must pay overtime for that extra two hours on Tuesday, so likely will turn down the request.

The Democratic Party, however, is strongly against any change. And it would be hard to pass an initiative that labor would label “anti-worker.”

Kashkari is going to have difficulty in the June Top Two primary besting his fellow Republican, Assemblyman Tim Donnelly of Hesperia. And Brown will be close to unbeatable in November.

But Kashkari’s plan includes a lot of good ideas and will stand him in good stead. And even losing campaigns sometimes churn up ideas that later are adopted by the victors.