Even Gov. Jerry Brown, who still hopes the bullet train will be the enduring legacy of his third stint as governor, might have been troubled by the conclusions of  experts that appeared before the committee.

William Ibbs[3], a civil engineering professor at the University of California, Berkeley, testified the planned high-speed rail system, which would stretch from Sacramento to San Diego, would cost far more than the $68 billion the California High-Speed Rail Authority currently is estimating.

Proposition 1A[4], the 2008 voter-approved ballot measure that authorized nearly $10 billion in bonds to help build the bullet train system, legally required the state to have all funds in place for a self-supporting, initial operating segment (ISO) before starting construction.

Sacramento Superior Court Judge Michael Kenny in November ruled[5] that the state was $25 billion short of meeting that prerequisite and therefore blocked the use of the bond funds. Earlier this month, reported the Fresno Bee[6], the judge “denied a request by the rail agency to dismiss the second stage of a lawsuit that questions whether the state’s proposed high-speed train system complies with state law.”

And as CalWatchdog.com reported[7], the matter now is on appeal with the Third District Court of Appeal of California.

Ibbs’ testimony suggested that the state may be considerably more than $25 billion short.

Louis Thompson[8], chairman of the High-Speed Rail Peer Review Group[9], outside experts impaneled by the state, said the guaranteed 2 hour and 40 minute trip between San Francisco and Los Angeles that voters were promised by Prop. 1A actually will take more like 3 hours and 10 minutes.

That’s half an hour longer than what voters approved.

Rail authority officials said after Thursday’s hearing that, even though they have walked back their guarantee that the bullet train “will run from San Francisco to the Los Angeles basin in less than three hours,” they still will be in compliance with  Prop. 1A, which required a system “designed to achieve” the run, even if doesn’t actually deliver the mandated speeds.

Then there was Paul Dyson[10], president of the Rail Passenger Association of California & Nevada[11], who said the rail authority’s decision to build the first stretch of the planned high-speed rail system between Merced and Palmdale was ill-advised, as the route will attract far fewer riders than necessary to be self-supporting, as also required under Prop. 1A.

Moreover, trains carrying passengers along that stretch will not be traveling “at speeds capable of over 200 miles per hour,” as the bullet train still advertised right on on the High-Speed Rail Authority’s web site (see the screen capture below). Instead, it will run at lower, more pedestrian speeds reached by unexceptional Amtrak trains.

If this were baseball, strike three would mean the game is over for California’s high-speed rail boondoggle. But for now, at least, Brown keeps supporting it. And Attorney General Kamala Harris, despite her own doubts — which CalWatchdog.com reported last October [12]— keeps defending it in court.

The Court of Appeal’s decision is expected in late April or early May.

And Brown’s May Revision to his January budget proposal also is due in early May, just five or six weeks from now. In light of Thursday’s hearing, the court ruling and other developments, it will be interesting to see if, or how, he keeps the rail plan in his budget. 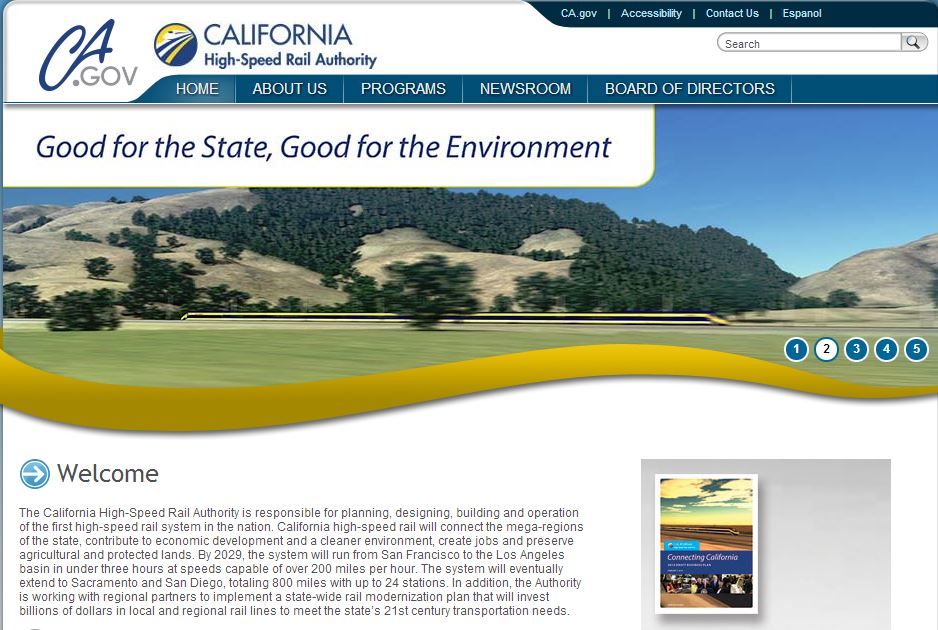