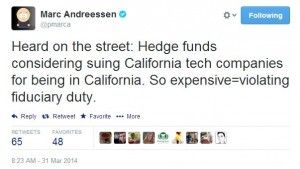 [1]You might remember Marc Andreessen. He co-authored Mosaic, the first decent Web browser, which I remember using when I got on the Net back in 1994. It became Netscape, which became Firefox.

“Heard on the street: Hedge funds considering suing California tech companies for being in California. So expensive=violating fiduciary duty.”

Will Google, Apple, Intel, Facebook and Twitter itself be forced by hedge funds to move to Austin and Seattle?