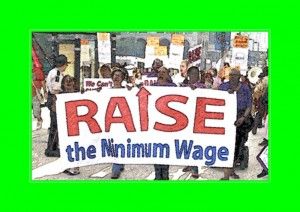 Current data show that, for Californians, rent and the cost of living are near the top for the nation. According to a new report issued[4] by the National Low Income Housing Coalition, California is the second least affordable state in the nation for renters. That would seem to indicate that a higher minimum wage is necessary just to afford decent housing in California. However, NLIHC president Sheila Crowley claimed minimum-wage increases alone cannot make up for a lack of adequate affordable housing.

As they have in the past, opponents of a higher minimum wage will point to a 2012 U.S. Census Bureau study, which found:

In short, few minimum-wage workers are heads-of-household supporting families by paying rent or a mortgage.

Brown also is unlikely to back Leno’s bill. Brown signed last year’s minimum wage increase only after[5] a cost-of-living section was removed by Alejo. Brown likely wouldn’t go for it this year. Brown also knows his Republican opponent in November will charge him with being anti-business. He wouldn’t want to confirm that charge by backing Leno’s much higher minimum wage boost.

President Obama also has been pushing for a higher minimum wage. The current federal minimum wage is $7.25. In January, he signed[6] a controversial executive order raising that to $10.10 — but only for federal workers. He also called for a similar hike for all U.S. workers. However, the Republican majority in the U.S. House of Representatives is highly unlikely to back such an increase.

Back in California, a lack of momentum scuttled tech entrepreneur Ron Unz’s attempt to get his own $12 an hour minimum wage initiative on the ballot this year. Blaming disinterest from unions and fellow conservatives alike, Unz insisted a higher in-state minimum wage would still help address national immigration and Social Security challenges. In California, however, the political battle lines make it hard for an unorthodox approach like Unz’s to swing influential figures or ordinary voters. On SB935, attention now turns to the full Senate.