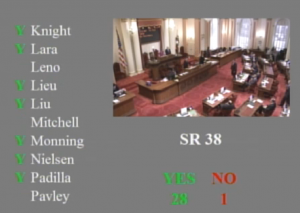 [1]A lone Republican lawmaker is calling on the California State Senate[2] to expel three of its Democratic members[3] that are facing criminal charges.

State Sen. Joel Anderson[4], R-Alpine, the lone dissenter in Friday’s vote to suspend with pay three members[5] of the state Senate[6], said that his three colleagues, who stand accused of criminal charges ranging from weapons trafficking to public corruption, should be expelled.

“There should be only one measure on this floor,” Anderson said in his floor speech, “and that’s to expel these members.”

None of his colleagues, Republican or Democrat, joined Anderson[7] in that call for expulsion. Instead, the Senate voted 28-1 to suspend with pay Democratic State Sens. Leland Yee[8] of San Francisco, Ron Calderon[9] of Montebello and Rod Wright[10] of Inglewood. The suspension restricts the members from returning to the Senate floor, or exercising any power of their elected offices until they are formally cleared of all criminal charges.

The members, however, will continue to collect their $7,940 monthly paychecks, courtesy of California taxpayers, which Anderson describes as a paid holiday.

“Which is it today? More smoke and mirrors? More paid holidays for bad behavior?” Anderson asked on the Senate floor. “What we’re doing is incentivizing bad behavior with this resolution. It’s wrong.”

He added, “How is it sitting at home … getting paid by the state Senate and the people … acceptable and a punishment in any way, shape or form?”

Anderson’s speech drew a haughty and flippant response from State Sen. Kevin de Leon[11] of Los Angeles, who is expected to take over as Senate president pro tem later this year.

“Smoke and mirrors, paid Roman monthly holiday vacations, raising my kids, incentivizing bad behavior, letters, thousands of letters upon letters that I guess have descended from the sky to the State Capitol,” he said in a stream of consciousness. “No individual, no group, no ethnicity, no gender, no political party has a monopoly on ethics or good behavior.”

Without referencing him by name, de Leon accused Anderson of engaging in “cannibalistic” behavior.

“Let’s burn the house down,” de Leon said sarcastically in defense of the Senate. “Let’s become cannibalistic, as long as my ratings go up in my district.”

De Leon then added that the California State Senate was the best institution in the country.

Of the three Democratic members facing criminal charges, de Leon said, “It’s an anomaly, a once-in-a-generation thing” and added that “the system in fact worked.”

“This is the best legislative institution in the country, hands down,” he said. “We’re going through very difficult times, and we’re going to get past this.”

Steinberg: No ethics class on gun-running

In contrast to de Leon, the current Democratic leader, Senate President Pro Tem Darrell Steinberg[12], spoke in a serious and contrite tone as he urged his colleagues to address their disgraced colleagues. He added that the latest accusations had changed his point of view.

“One is an anomaly. Two is a coincidence. Three?” he said. “I am calling on our entire body to take a deeper look at our culture.”

The Democratic leader, who had previously called for restraint as the members pursued their legal options, said that the Senate would conduct an “office-by-office ethics review” on April 7. Yet, he recognized the limits an ethics review.

“I know of no ethics class that teaches about the illegality and the danger of gun-running,” Steinberg said. “We express our anger and our revulsion at today’s events.”

Senate GOP leader Bob Huff[13] of Diamond Bar did not speak during the floor debate on the suspension measure. He has faced criticism for his response[14] to the ethics scandals.

Three members of the California State Senate are the subjects of three separate criminal cases. The most serious of the three cases surfaced last week, when the FBI arrested Yee on weapons trafficking and pubic corruption charges. Referred to as “Uncle Leland” by his co-conspirators, the San Francisco Democrat allegedly offered to smuggle millions of dollars worth of automatic weapons into the United States from a Muslim separatist group in the Philippines, according to the FBI affidavit[15].

In February, Senator Calderon was charged with a 24-count[16] indictment in connection with bribery and corruption. In January, Senator Wright[17] was found guilty of eight[18] counts of felony voter fraud, perjury and filing a false declaration of candidacy.