For The Los Angeles Times, a highly revealing juxtaposition 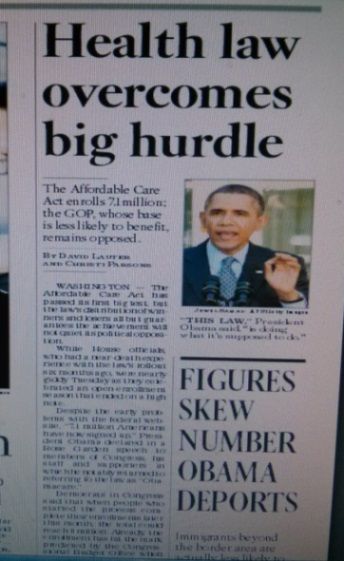 If you’re a conservative or libertarian who’s not just mad but astounded by how much the media protect Barack Obama, Wednesday’s front page[1] of The Los Angeles Times was likely to generate either a stroke or a snort of disbelief/amusement. But if you are someone who may not be ideological yet is open to the idea that media bias is real and powerful, it should have been a jolt, too.

The lead story[2] on the top right of the page was a news account of President Obama’s Tuesday “victory lap” press conference in which he said that the fact that 7.1 million Americans had allegedly enrolled under the Affordable Care Act was proof that he was right and everyone who criticized the ACA was wrong. The headline pushed readers to accept this view; the subhead made the case that only selfish people opposed the law.

In the story itself, the first half by David Lauter and Christi Parsons of the Times’ Washington bureau gave no larger context at all — it was all “victory lap.” Among the 40 relevant things it didn’t mention, most significant was the fact that it chose not to say that so many past claims about Obamacare proved wildly in error. Nor did it emphasize that it appears that there were more people signing up for the ACA through government exchanges because they lost their coverage due to ACA rules then there were of people who previously had no health insurance.

The whole point of Obamacare was supposed to be to get health insurance to the uninsured — not to create churn among the insured that pushed them into having to use government alternatives. Yo, David! Yo, Christi! Isn’t this, yunno, news?

But the patheticness of this cheerleading for Obama was triply underscored because just underneath the story was another piece that also had as a core element the question of whether the White House could be trusted: LAT reporter Brian Bennett’s detailing of the dishonest way the Obama administration had reported deportation numbers to buy it political cover. The (pathetic) headline: “Figures Skew Numbers Obama Deports.” Not “Obama Skews Numbers Of Deportations.”

However painfully biased the headline was, the story made plain[3] the duplicity of Obama’s White House:

“WASHINGTON — Immigration activists have sharply criticized President Obama for a rising volume of deportations … But the portrait of a steadily increasing number of deportations rests on statistics that conceal almost as much as they disclose. A closer examination shows that immigrants living illegally in most of the continental U.S. are less likely to be deported today than before Obama came to office, according to immigration data.

“Expulsions of people who are settled and working in the United States have fallen steadily since his first year in office, and are down more than 40% since 2009.

“On the other side of the ledger, the number of people deported at or near the border has gone up — primarily as a result of changing who gets counted in the U.S. Immigration and Customs Enforcement agency’s deportation statistics.