The reality of politics 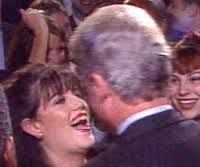 [1]He wasn’t as eloquent as Machiavelli, but President Bill Clinton summed up t[2]he essence of politics more pithily: “I take care of my friends and I [expletive deleted] with my enemies.”

The rest is just rhetoric to fool the masses. But the masses are catching on. Reason.com reports[3]:

Americans don’t paint a pretty picture of their public servants in the new national Reason-Rupe poll[4]. Americans tell Reason-Rupe that 75 percent of all politicians are “corrupted” by campaign donations and lobbyists.  And they say 70 percent of politicians use their political power to help their friends and hurt their enemies.

No wonder just 17 percent approve of the job Congress is doing.  Or that President Obama’s approval rating is just 43 percent, with 51 percent disapproving.

And while the Supreme Court just struck down limits on campaign contributions to federal candidates, the new Reason-Rupe poll finds Americans are actually more concerned about how elected officials misuse their power and taxpayer money once they’re in office than they are worried about campaign contributions.