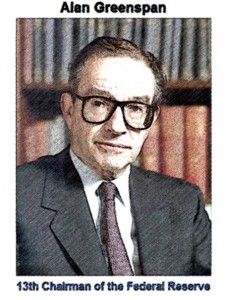 [1]The middle class in California and the rest of America keeps fading away under assaults from Republicans and Democrats, Presidents Bush and Obama, Govs. Schwarzenegger and Brown. The latest from AP[2]:

“Since 2008, the number of people who call themselves middle class has fallen by nearly a fifth, according to a survey in January by the Pew Research Center, from 53 percent to 44 percent. Forty percent now identify as either lower-middle or lower class compared with just 25 percent in February 2008.

“According to Gallup, the percentage of Americans who say they’re middle or upper-middle class fell 8 points between 2008 and 2012, to 55 percent.”

There are many bipartisan culprits. But let’s just finger one here: the Federal Reserve Board. The Democrat Paul Volcker[3], Fed chairman from 1979 to 1987, was the last one with decent policies. He was appointed by Democratic President Jimmy Carter. Volcker crushed the “stagflation” — stagnation plus inflation — of the 1970s with tight money and high interest rates. Prosperity ensued, also due to Republican President Reagan’s 1981-83 tax cuts.

Volcker gradually cut interest rates. But he kept rates always about 2 percentage points above the inflation rate. That way, people could save money in their passbook savings accounts. They could build for the future.

Greespan was good for a while. But after the 9/11/2001 terrorist attacks, Greenspan panicked, inflated the dollar and cut interest rates to zero for most of his term. Doing so funneled too much money into the supposedly fragile economy. But meant the middle class couldn’t save money on its passbook savings accounts. Inflation came rushing back — that’s why 99-cent gasoline in 2000 now is $4.00 — also crushing the middle class.

Bush Dos appointed the next Fed chairman, Republican Ben Bernanke, in 2006. Democratic President Barack Obama re-appointed Bernanke in 2010. Bernanke continued the Greenspan policies. Along with the other bad policies by presidents and Congress (not covered here), the Greenspan-Bernanke zero percent interest rate policy set the middle class up for the Sept. 2008 economic collapse.

Zero interest rates mean money cannot be saved the normal way. With inflation at least 2 percent (probably more like 8 percent[5]), the middle-class’s savings are drained away. Credit-card interest rates of up to 30 percent also gouge the middle class.

With people unable to save the normal way, they lose money on passbook savings, don’t invest or put what little money they might have into stock market speculation. The Fed inflationism also pours artificial money into stocks. Hence, the record stock prices of recent years, mainly benefitting the rich. But the “prosperity” all is fake, based on money creation and low interest rates.

Obama just appointed Democrat Janet Yellen as Fed chairperson. She said[6] she will continue the Greenspan-Bernanke zero interest rate policy “for some time.” So the Fed will continue to gut the middle class, which just can’t save to lift itself up.

It’s a bipartisan, 13-year ripoff of the middle class.

And eventually this house of cheap credit tricks will fall down.