[1]Sonoma Clean Power officials and advocates got a charge from recent news that 95 percent of county eligible ratepayers will be switched to their electricity service[2] from Pacific Gas & Electric. The switch was automatic, although ratepayers could opt out of the switch and remain with PG&E. Only 5 percent did opt out.

According to the Santa Rosa Press Democrat[3]:

“About 24,000 power customers … are eligible to begin receiving electricity through Sonoma Clean Power.

“More important, Sonoma Clean Power has not only been able to keep rates competitive with those of Pacific Gas and Electric Co., they, by all appearances, will come in below. Those who go with Sonoma Clean Power can expect to pay 2 to 3 percent less.”

But Sonoma County electric ratepayers may want to think a second time about automatically “opting in” to the program and supposedly saving a couple of percentage points off their bills.

SCP is a new municipal electric utility created under the Community Choice Aggregation[4] law in California. This allows cities to disconnect from having to buy power from PG&E and purchase their own power, or build their own new “clean” power plants.

All customers are automatically transferred to the new city-owned utility, but also have the choice to “opt out.”

For SCP customers, PG&E would continue to handle billings, maintenance and transmission and distribution of electricity. 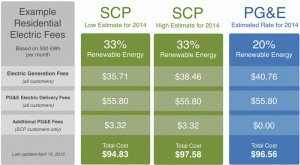 The justification for creating SCP is that it claims it can deliver cheaper, and especially cleaner, power to customers than PG&E.

However, PG&E supplies electricity to Sonoma County mainly from the Diablo Canyon Nuclear Power Plant[6] and hydroelectric power plants, both of which already deliver very cheap and totally clean power. A Fukushima-type [7]nuclear power plant failure is nearly impossible at Diablo due to its superior design.

Nuclear power from the Diablo plant is produced at a wholesale price of 1.6 cents per kilowatt-hour[8] — an unbeatable low price. 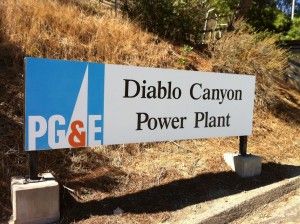 The North Bay Business Journal estimated that SCP possibly could produce electricity at about the same rate as PG&E, but it would include a higher percentage of clean power. Yet that may be hard to achieve because, as noted, PG&E’s power already comes from clean hydro and nuclear power.

Pricey, clean power can be justified in California where the topography creates air basins that trap smog, such as in Los Angeles County. But Sonoma County enjoys comparatively clean air quality because the air basin around Santa Rosa is relatively small and narrow.

Neither SCP nor PG&E plans to put power plants in Sonoma County that would contribute to air pollution.

Sonoma County’s shift to clean power will create some local jobs because PG&E’s generation and purchasing of power is centralized outside the county. SCP would bring some of those jobs home.

Sonoma also could create jobs by its own rooftop residential solar rebate program. But that would just mean providing cheap, clean rooftop solar power to a few residents and shifting the higher costs of solar power onto those customers without solar systems.

According to Stanford University, the levelized cost of rooftop solar power is 24-cents per kilowatt-hour[11], excluding reverse metering costs, tax credits and any local subsidies. Reverse metering entails having to reengineer the electric grid to run two ways, both to and from its customers.

To make clean power economically feasible, its higher cost has to be socialized over a large number of electric ratepayers and taxpayers, or shifted to large commercial users, such as California’s cap-and-trade[12] emissions program does.

But some Sonomans might say, “What do we care if clean energy is socialized, as long as we can privatize the profits and socialize the costs onto other PG&E or SCP customers, while creating local jobs?”

There are a couple of responses that show the risk:

1. A county-run municipal electricity utility is non-profit, so it cannot make profits or enjoy clean-power tax credits or tax write-offs.

2. Power plants built by PG&E can be financed by both taxable debt and equity (stocks), while SCP can avail itself only of tax-exempt bonds.

3. SCP is gambling that it can buy cheap power or build power plants that generate cheap, clean power.  If SCP builds power plants, it incurs the risk that the power cannot be sold at the cost to produce it.  Alternatively, if SCP buys power in the spot market, doing so would expose it to the risk of market price volatility.

4. Bill Roberts[13], an economist for the Bay Area Economic Forum, warned of unexpected costs in his 2007 study on the municipalization of local power purchases and generation. He wrote, “[I]f the incumbent utility operates any retained generation and the [Community Choice Aggregation] purchases 100% of its power supply from the competitive market, the CCA cannot avoid higher average rates than the utility unless it subsidizes rates (or somehow wins the gamble of ‘beating the market’).”

5. To beat the market, SCP must build its own power plants. SCP wants to build a new geothermal power plant nearby in The Geysers[14], the world’s largest geothermal energy field. But tapping new geothermal power is a very risky venture, as Gov. Jerry Brown found out with the Bottle Rock Geothermal Power Plant[15] after he left the Governor’s office in the 1980s.  The Metropolitan Water District of Southern California ended up having to pay off $282 million in bonds to bail Brown out of a political fiasco.

SCP soon will have to bring a concrete proposal for a clean power plant before the county Board of Supervisors for review.  If it doesn’t make economic sense upon independent review, it remains to be seen how many Sonoma County residents may want to reconsider their gamble on municipal clean power, and instead “opt out” of the program.