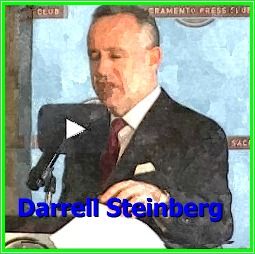 [1]In response to ongoing corruption cases[2], the California State Senate will postpone all committee hearings scheduled for April 23 and in their place host an all-day ethics discussion and training session[3].

In a Wednesday afternoon email (reprinted at the end of this article), Kathy Dresslar[4], Senate President Pro Tem Darrell Steinberg[5]‘s chief of staff, requested that Senators, committee staff and Capitol office employees “clear their calendars for this one day to devote to the ethics training and discussion which is being planned.”

Steinberg: No ethics class on gun-running

Allegedly referred to as “Uncle Leland” by his co-conspirators, the San Francisco Democrat allegedly offered to smuggle millions of dollars worth of automatic weapons into the United States from a Muslim separatist group[7] in the Philippines, according to the FBI affidavit[8].

In February, state Senator Ron Calderon[9] was charged with a 24-count[10] indictment in connection with bribery and corruption. In January, state Senator Rod Wright[11], D-Inglewood was found guilty of eight[12] counts of felony voter fraud, perjury and filing a false declaration of candidacy. Wright’s case did not involve any allegations of bribery or corruption.

Following Yee’s arrest, Steinberg called upon “our entire body to take a deeper look at our culture.” But he has also recognized the limits of an ethics review.

“I know of no ethics class that teaches about the illegality and the danger of gun-running,” Steinberg said[13] during the Senate’s debate over whether to suspend the members with pay.

The Senate has been mixed in its response to the scandals. Earlier this month, Senate Democrats canceled a luxurious annual fundraising event[14], known as the Pro Tem Cup, citing the “recent and extraordinary breaches of the public’s trust” by three Democratic state senators as the reason.

However, the Senate Democrats also kept the campaign cash, and in place of the golf tournament, personally called each of the event sponsors.

Over the weekend, the California State Senate scrubbed the websites and online archives of the three Senators[15] that face criminal charges.

In addition to pictures and video clips, the websites contained detailed information[16] about the senators’ legislative achievements and ties, which could shed light on past deals or questionable votes. Although some of the information, such as bill language and votes, remains available on other websites, the individual pages acted as a repository or central clearinghouse for information about the Senators.

The following is the complete text of Kathryn Dresslar’s memo on Senate ethics training:

I wanted to give everyone a heads up that the Senate Ethics Discussion and Training for all Senators, their Capitol offices and Committee offices will take place on Wednesday, April 23, 2014. Dana Callison will be sending out a more detailed memo soon, but I wanted you to know that the pro Tem is requesting that Members and staff clear their calendars for this one day to devote to the ethics training and discussion which is being planned.

Following is a list of hearing room assignments for the Committee hearings that will convene on
Thursday, April 24:

As I mentioned, we will send more details as they are available, but wanted you to clear the calendars for Wednesday, April 23 for Members staff.