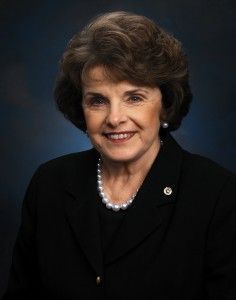 [1]U.S. Senator Dianne Feinstein, D-Calif., is renewing her call [2]to Republican senators to vote for her revised compromise drought bill, S. 2016[3], the California Emergency Drought Relief Act of 2014.  Feinstein claims her bill is five votes short of the 60 needed for  passage.

If passed, the Senate would forward her bill to the Republican-controlled U.S. House of Representatives for possible reconciliation with a dissimilar drought bill pending there, H.R. 3964[4], the Sacramento-San Joaquin Valley Emergency Water Delivery Act of 2014, by Rep. Devin Nunes, R-Calif.

But why aren’t the Republican senatorial fish biting at the Democrat bait?

The mainstay of Feinstein’s bill is not based on repealing environmental laws, but on the greater “flexibility” of water allocations among fish, farmers and cities. Feinstein’s call to relax environmental regulations during the drought has incensed environmental organizations such as the Bay Institute in San Francisco.

By contrast, the GOP bill in the House does repeal environmental laws.

Except for Oregon, there is nothing in a California drought bill for most senators from states outside of California.

So back on Feb. 14, 2014, Feinstein, joined by Sen. Barbara Boxer, D-Calif., smartly broadened the base of possible support for S. 2016 by getting support from both Democratic U.S. Senators from Oregon, Ron Wyden and Jeff Merkley.  Merkley is facing re-election in November against Republican challenger Monica Wehby, who is running on a platform of water deregulation.

Feinstein’s drought bill makes Merkley look like he is the candidate who wants to reduce inflexible regulations that prevent farmers from getting water in a drought.

Feinstein claims the money allocated to drought relief in her bill would go to alleviating some of the impacts of drought along the Klamath River Basin in Oregon.  However, the $300 million in drought relief in the Feinstein bill is the same funding touted by President Barack Obama when he visited California [5]in February.

The Farm Bill of 2013[6], approved by both houses of Congress, already allocated that funding.  So there is no new drought funding in the Feinstein bill that makes voting for it necessary.

Moreover, Section 13.2 of the Water Rights Decision 1641[7], adopted in 1999 by the California Water Resources Control Board, already provided the flexibility[8] Feinstein says is needed to provide drought relief (see here[9] and here[10]).

Decision 1641 also provided that any subsequent decisions could override provisions of the California Environmental Quality Act and the U.S. Endangered Species Act in the “greater public interest” (Section 14.4).  That means water could be provided to farmers over fish in a drought.

“Elected officials are charged with representing the needs and interests of their constituents, a difficult challenge for Senators in a state as diverse as California. Elected officials, unlike agency staff, are accountable to the constituents they represent, and as such are the appropriate ones to engage in policy-making. When a law or other policy isn’t working, they have the responsibility to evaluate it and make the necessary changes.”

Wade also brought up the Bay Institute’s opposition to any purported relaxation of environmental regulations that might allocate more water to farmers:

“Environmental interest groups like the Bay Institute seem to want flexibility by everyone but themselves. There is little care for the people who are standing in food lines because no water is being delivered to support their jobs. In extreme years like this you would hope that even the most ardent environmental activists would show a little humanity.”

So why the mostly symbolic outrage by environmental organizations over the relaxation of environmental regulations that were already approved and met all requirements of CEQA and the Federal Endangered Species Act? Because elections are coming up.

So, as noted above, Democrats need Merkley to retain his Senate seat from Oregon.

Democrats in the House also are worried about losing more seats to the majority Republicans. The district of Rep. Jim Costa, D-Fresno, is in the drought epicenter.  Costa is a member of the Subcommittee on Water and Power in the House.

Costa has lifted his own drought bill in the House, H.R. 4039, the California Emergency Drought Relief Act of 2014. It is co-sponsored by Rep. Tony Cardenas, D-Los Angeles, and Rep. Sam Farr, D-Carmel. Farr is an environmental advocate who is up for re-election in a congressional district where the Lompico Water District is likely to run out of water this summer.

The plan is for a rising tide of empty water bills to lifts all Democratic Party political ships in California for 2014.