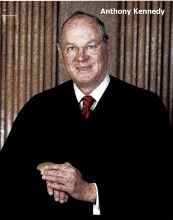 “There is no authority in the federal constitution or in the [courts’] precedents for the judiciary to set aside Michigan laws that commit to the voters the determination whether racial preferences may be considered in governmental decisions, in particular with respect to school admissions….

“This case is not about how the debate about racial preferences should be resolved. It is about who may resolve it.”

The decision involved an initiative Michigan voters passed that was similar to Proposition 209[2], which California voters passed in 1996. Prop. 209 was crafted to echo the civil rights legislation of the 1960s which banned racial discrimination. Unfortunately, since the 1960s affirmative action and other schemes have been used to bring back a racial spoils system.

“Prohibits the state, local governments, districts, public universities, colleges, and schools, and other government instrumentalities from discriminating against or giving preferential treatment to any individual or group in public employment, public education, or public contracting on the basis of race, sex, color, ethnicity, or national origin.”

Opponents claim that past and current discrimination keep minorities from government jobs and college and university admissions places. Therefore, affirmative action, including quotas for minority members, is needed.

In California, two recent events have shown the problems with affirmative action, and why a
“color blind” system is best, and most just.

Last month, Asian-American leaders in the California Legislature forced the Democratic leadership to back down[3] on an attempt to reverse Prop. 209 and bring back racial quotas. The Asian-Americans saw that it would reduce the number of their kids in state colleges and universities.

It’s true that Hispanics now make up about 50 percent of California high-school seniors; and blacks make up about 6 percent. So they are not going to UC at an equivalent rate. But the problem there, of course, is that so many schools Hispanics and blacks attend are among the worst in the state.

It doesn’t make sense to send to UC students who have not been properly educated by bad schools. It does make sense to raise standards, for example, by giving merit pay to the most effective treachers. But that particular reform still is resisted strongly by the teachers’ unions.

By effectively upholding Prop. 209, what today’s decision does is put the emphasis on helping Hispanic and black kids — and white and Asian-American kids as well — where it should be: on the schools.