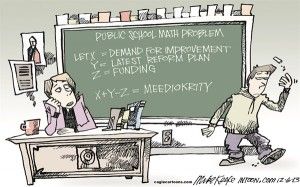 Neel Kashkari, the Republican candidate for governor who promised to campaign on “jobs and education, that’s it[1],” delivered on half of that platform Tuesday, with the release of a bold plan for overhauling[2] the state’s failing schools.

In a detailed 33-page proposal, Kashkari calls for rerouting education funding directly to schools, eliminating the vast majority of the state’s education code, and mandating that 20 percent of state college and university courses be conducted online.

“We cannot rebuild the middle class by making minor changes,” Kashkari writes in his education plan[3]. “Bold action is necessary to equip every Californian with the skills they need to build a better life for themselves.”

Among Kashkari’s proposals for K-12 education:

“With the right leadership and the right reforms, we can transform our schools to lift achievement and rebuild California’s middle class,” Kashkari said.

State lawmakers of both parties embraced aspects of Kashkari’s proposals.

“Studies show by 2025 California will be short 1.1 million educated workers,” said Assemblyman Scott Wilk, R-Santa Clarita, who serves as a member of the Committee on Higher Education. “Gov. Brown has failed to lead on this issue. Neel Kashkari’s education plan provides a roadmap to greater prosperity for our state.”

“Gov. Brown has based his re-election campaign on the myth of a ‘California comeback,’ but the truth is that, under his watch, the middle class has been devastated,” Kashkari[5] said in a press release announcing the proposal. “Worse still, he continues to pursue superficial measures that treat only symptoms instead of undertaking bold education reforms that will help lift student achievement and rebuild the middle class.”

A spokesman for Gov. Brown’s campaign said that school reforms are underway, thanks to new funding from Proposition 30, the governor’s $7 billion a year tax increase approved by voters in 2012.

“Major and significant reforms of education in California are now underway thanks to the passage of Gov. Brown’s Proposition 30 and his historic Local Control Funding Formula,” said Dan Newman, an adviser and spokesman for the Brown campaign. “While others are talking education, Brown is the only candidate for governor who personally started two charter schools which are still going strong.”

More than half of California’s annual $98 billion general fund budget goes toward K-12 and higher education. Yet, the state has little to show for those huge budget expenditures as California schools routinely rank near the bottom of national tests scores. In 2013, the National Assessment of Educational Progress placed the state’s fourth-graders 47th in the nation in both math and reading[6]. The state’s eighth-graders performed slightly better — ranking 45th in math and 42nd in reading.

It’s not just low test scores that have education experts concerned. According to a 2013 report prepared for the California Commission on Teacher Credentialing[7], California has experienced “the biggest decline recorded over the past decade” in enrollments in teacher preparation programs.

“Mr. Kashkari’s proposals are missing one fundamental item— sufficient funds,” said Williams, who serves as chair of the Assembly Committee on Higher Education. “Despite the obvious benefits of investing in higher education, the CSU and UC systems experienced deep cuts during the economic recession.”

Williams credits the recovering economy and Prop. 30 tax hikes with providing the state with “the economic wherewithal to reinvest in our public education system.”

Although he was critical of Kashkari’s education plan for lacking budget specifics, Williams offered some encouraging words about the Republican candidate’s ideas for reforming California’s higher education system, which includes community colleges, the Cal State University system and University of California system.

Kashkari’s proposals include establishing different goals for each system, allowing students to more easily cross-enroll, mandating all UC and CSU schools place 20 of their courses online within four years, and establishing a voluntary financing program for science and technology students to receive free tuition in exchange for a small interest in their future earnings.

“The ‘Pay It Forward’ proposal, upon which this idea is based, is gaining traction across the nation,” Williams said. “My committee, in fact, recently approved a ‘Pay it Forward, Pay it Back’ pilot program study. I’m interested in seeing the results of this study and whether this proposal is workable in a state the size of California.”

As policymakers investigate the ‘Pay it Forward, Pay it Back’ model, one area that’s receiving nearly universal support is the growing use of online education, which is backed by legislators and the major candidates for governor.

“I’m a supporter of high-quality online education,” Williams said. “I also recognize that online may not be right for every course and every student.”