Push for sharp minimum-wage hike under way in San Diego 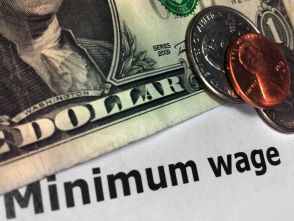 California’s second-largest and the nation’s eighth-largest city appears sure to have a six-month-plus debate over whether to raise the minimum wage much more than the state government has in store. The Democratic majority of San Diego’s City Council is going to put a proposal on the November ballot, with the specifics not yet clear. This is from a news account in U-T San Diego[1]:

“DOWNTOWN SAN DIEGO — The city of San Diego’s minimum wage would increase to $13.09 an hour during the next three years under a proposal unveiled Wednesday by City Council President Todd Gloria.

“The proposed hikes, which would make San Diego’s minimum wage among the highest in the nation, would be part of a measure that Gloria and other supporters plan to place on the November ballot. …

“Gloria described Wednesday’s proposal, which was the first time he’s attached specific numbers to his campaign for a higher minimum wage, as a starting point for debate about the details of the possible ballot measure. …

“The proposal would put San Diego’s minimum wage significantly above what the state requires, which is $8 an hour but will rise to $9 on July 1 and $10 in 2016.” 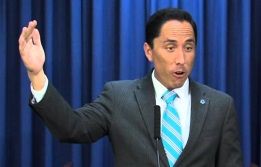 I went to the news conference at San Diego City Hall where Gloria announced and took questions on his plan.

The council leader is much better-liked by Republicans, conservatives and libertarians than most San Diego Democrats. A big reason for this is that he abandoned the Dem-union push to nullify through obstruction a voter-endorsed 2006 initiative that calls for some city services to be subject to bidding[2] that pits private companies and groups of government workers.

But the candor and pragmatism Gloria displayed in standing up to unions on that issue just wasn’t in evidence Wednesday. Here’s some of the editorial I wrote for U-T San Diego[3] about his defense of his proposal:

“… the council leader was asked if much higher minimum wages were so good for the economy — as he contended — why didn’t businesses clamor for them? He responded by noting that many companies already pay more than $13.09 an hour. But that’s a decision they made — not one forced on them by local government.

“Gloria also said having much higher minimum wages was widely supported by the business community. That’s just not so. If his proposal is adopted, it ‘puts San Diego at a competitive and economic disadvantage,’ said Chamber of Commerce President Jerry Sanders.

“Gloria was asked if he worried about companies relocating to cities with lower minimum wages. But he said they wouldn’t because of relocation costs.

“So according to Gloria, businesses aren’t troubled by the prospect their payrolls may permanently get much bigger — but they are daunted by relocation costs. Really?”

How to help the CA middle-class: Revive redevelopment?!

Then Gloria really drove me around the bend with his economic rX for the Golden State:

“After saying there were economic policies he couldn’t influence because they were ‘above my pay grade,’ Gloria was asked what he thought Sacramento policymakers should do to create middle-class jobs.

“His response was strikingly government-centric: The council president didn’t say the state should try to change a business climate that U.S. CEOs have long called the most hostile in the nation. Instead, he said the state should revive redevelopment, in which public funds are used to attempt to revive blighted areas.”

With a handful of exceptions, some of them arguable, redevelopment was an ongoing fiasco[4] in California for decades before Jerry Brown killed it. Doing so was the best decision Brown has made in his second turn as governor. Redevelopment sounds peachy keen, but in practice — both in California and around the U.S. — it has a lengthy history of allowing politically connected developers[5] to use government eminent-domain powers to grab the land of existing, successful businesses without clout or fund-raising prowess.

So fear for the future, Californians. If this sort of policy prescription is the best we can hope for from one of the more reasonable members of the state’s dominant political party, we’re doomed.