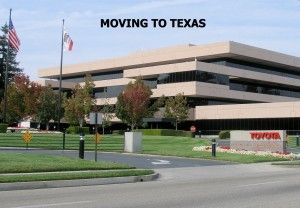 In another major blow to the California economy, Toyota is moving its headquarters from Torrance to Dallas after 57 years here. The excuse is that it wants to be near its manufacturing plants in the Southeast. That itself is telling. Toyota shut down [1]its last Golden State plant in Fremont in 2009.

The plant now makes Teslas[2], a car that wouldn’t exist without massive government subsidies [3]and credits. It’s the only car plant left in California. It’as basically a high-tech Trabi[4].

On the Toyota move, the L.A. Times reported[5] about Occidental Petroleum and other companies fleeing California:

Like these other companies, Toyota could also save money in an environment of lower business taxes, real estate prices and cost of living.

Frank Scotto, Torrance’s mayor, said he had no warning of Toyota’s decision. He said he did know that the automaker planned a corporate announcement for Monday.

The mayor said businesses bear higher costs in California for workers’ compensation and liability insurance, among other expenses.

And remember, almost all those several thousand Toyota jobs are middle-class jobs on which to raise a family. This is another indication that the middle class just isn’t welcome in California.

That is, it’s not going to happen.