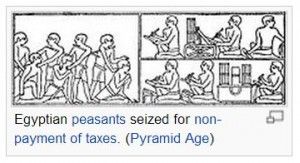 For Californians, today is Tax Freedom Day. That means, if you had to pay all your taxes first before getting any of your earnings for yourself and your family, from Jan. 1 to April 29, every cent would go to government. Only now, on April 30, would you start getting your own money to spend. Assuming you and your family had not starved to death outside.

Tax Freedom Day is calculated by the Tax Foundation[1]. For the nation as a whole, Tax Freedom Day — which includes all federal, state and local taxes — was April 21, three days later than in 2013. Say, wasn’t the Republican U.S. House of Representatives supposed to be keeping a lid on taxes? Except you might remember Speaker John Boehner and the boys agreed with President Obama to a Jan. 1, 2013 to a tax increase on both the rich and the middle-class[2].

At least in California we’re better off than three other states. For the sad souls who live in New York, Tax Freedom Day doesn’t come until May 3; and for New Jersey and Connecticut, it’s as late as May 9. And they have bad weather.

So all those Toyota employees being relocated to Texas [3]will enjoy not only lower housing prices, but lower taxes as well.