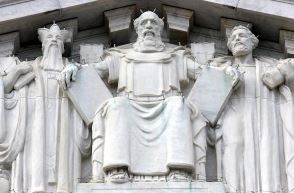 In one of those weird rulings, today the U.S. Supreme Court decided[1] that it’s OK for local governments to open meetings with prayer.

It’s weird because the Court itself opens with the prayer, “God save the United States and this Honorable Court!” — a quote directly from the Court’s own website[2].

The new decision was 5-4, with the four most liberal justices against. They believe the First Amendment’s ban on establishing a government religion bans all mention of religion of any kind in any government situation. But how could they have wanted to ban something the Court itself does? Why was this case even taken up? Shouldn’t they first insist on ending their own prayer?

Moreover, the Supreme Court building in D.C.[3] itself displays the 10 Commandments and Moses, God’s law-giver in the Old Testament. See the above picture. Shouldn’t the four liberal justices be outside right now with chisels, erasing Moses and other religious statues from their own building?

At least for local government meetings, we still can get those reminders — for now.