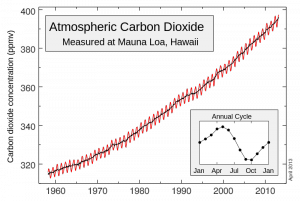 CO2 is a greenhouse gas of the type that AB32, the Global Warming Solutions Act of 2006[2], is designed to reduce.

At the top of the Chronicle article is a chart of what’s called the Keeling Curve[3] (another version is displayed nearby). It shows that C02 levels have risen in the past 50 years from 310 to 401.25 parts per million (ppm) as of April 29, 2014. According to the Chronicle, this is the first time in human history that C02 has broken the 400 ppm level.  The source of this data is the Scripps Institution of Oceanography at U.C. San Diego.

The Keeling curve is self-named after the late Charles Keeling, who first compiled recent historical C02 data from measurements at the Mauna Loa Observatory in Hawaii.  Keeling’s son, Ralph, has continued to compile the measurements from Mauna Loa to stay “on the cutting edge of what we’re doing to the planet.”

Ralph Keeling[4] said, “The programs have been supported over the years almost entirely through a bundle of federal grants, typically lasting three years or so, with several grants running at one time.”

The food chain of this funding has recently been difficult because several grants have expired.  Keeling called the funding situation “very urgent.”

Charles Keeling was famous for interpreting the increase in C02 as correlated with the amount of fossil fuels burned per year.  But the Keeling Curve does not show any correlation to rising temperatures and industrialization. That is just assumed.

New York physicist John Droz[5] was asked if he was a global warming scientist or skeptic and if he would comment on the announcement that C02 has exceeded 400 ppm.  He replied:

“I would categorize myself as a Scientist, plain and simple. I go where the Science leads me.  The San Francisco Chronicle article is grossly biased in several regards — and typical of how politics (not science) is what the Human Caused Global Warming issue is all about.

“For example they write that CO2 is increasingly saturating the atmosphere — yet their own figures say that it is a 400 parts per million. Since when is a concentration of 0.0004% called saturation?

“Another unscientific conclusion is that it’s all the fault of fossil fuels. The reality is that there are a wide range of CO2 sources and sinks, and we do not have an accurate handle on their exact amounts or interrelationships. Yet another blathering remark is to call the atmosphere ‘a waste dump for carbon pollution.’ Regardless of their credentials, people making such statements are promoting a political agenda, not genuine Science.”

Paul C. Knappenberger[6], assistant director of the Center for the Study of Science at the libertarian Cato Institute, wrote by email:

“400ppm CO2 is cause for celebration rather than consternation as it is a reminder of our continuing success at expanding the global supply of energy to meet a growing demand. That success ultimately leads to an improvement of the global standard of living and a reduction in vulnerability to the vagaries of weather and climate.”

The Keeling Curve[3] is not a curve at all but a wiggling straight-line relationship between the level of C02 and the number of years since 1958 (see above). The reason the line in the chart wiggles is that C02 is lowest in the Northern Hemisphere in warmer July, then quickly rises in colder November.  As scientist John Kehr[7] wrote in his book, “The Inconvenient Skeptic: The Comprehensive Guide to the Earth’s Climate”[8]:

“Of course the earth is also substantially cooler in November even though the global C02 level is higher than it is in June” (p. 71).

If C02 is causing global warming, why is the highest concentration of C02 during the winter in the Northern Hemisphere?  This self-contradiction in the Keeling Curve was not explained to readers of the Chronicle article. 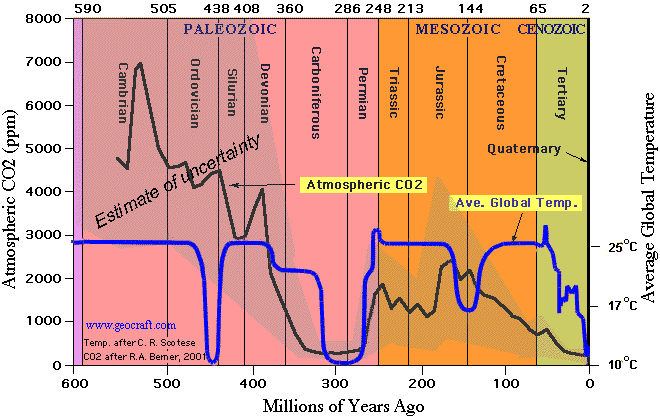 So Ralph Keeling’s claim that the level of C02 is the highest in millions of years is not inaccurate. But it does not follow that it has anything to do with industrialization, climate change or global warming.

Former NASA scientist and emeritus professor of physics Les Woodcock[9] of Great Britain said this past week, “the term ‘climate change’ is meaningless.”

Refuting both Keelings, Woodcock said, “There is no reproducible scientific evidence C02 has significantly increased in the last 100 years.”  Woodcock called the kind of science that Keeling does “anecdotal evidence [that] doesn’t mean anything in science, it is not significant.”

Ralph Keeling’s money problems are an indication that the days of automatic funding for global warming/climate change projects may be over.

However, in California so far there is no serious movement on calling into question the need for AB32 and its mandates for cutting CO2.