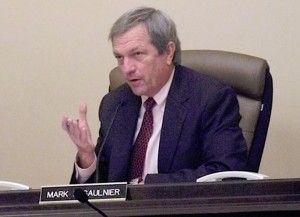 A new bill would hike taxes on corporations with the biggest spread in paid wages.

Rather than raising state corporate taxes across the board, SB1372 exaggerates California’s targeted approach to business taxation. The state already[3] taxes financial institutions at a special, higher rate — a 10.84 percent levy on income instead of the 8.84 percent applied to other corporations. Now, DeSaulnier and Hancock want to single out corporations that pay their CEOs the most relative to the median income paid to their employees.

Instead of the flat rates currently imposed by law, SB1372 would create a complex sliding scale. The legislative counsel’s digest[4] sums up the proposed changes in the following chart. Numbers in the left column refer to the percentage that CEO pay exceeds pay for a corporation’s median employee:

In other words, SB1372 does two things. Not only does it penalize some corporations for their pay structure — it rewards others for their own.

Critics have argued that the bill’s approach is unwise because it’s bad for business. If California is going to use tax policy to modify behavior, they say[5], legislators should create incentives that create jobs. As the state continues to suffer[6] high-profile job losses, pro-business advocates in California fear that higher rates and more complicated tax interventions will discourage new business formation and relocation.

Labor unions, meanwhile, are playing a significant role in the campaign. The AFL-CIO, for instance, recently focused on pay disparity in its annual “Executive Paywatch” report. One prominent talking point emphasized[9] that, for S&P 500 companies, the average profit per employee topped $41,000. The report implied that high-end CEO pay unjustifiably spends company profits on executives, not workers.

The report, however, obscures one reason for pay disparity that SB1372 also does not take into account. Profit per employee may be an important new metric in business analysis, as the influential consulting giant McKinsey has pointed out[10]. Understanding CEO pay scales, however, requires a detailed comparison between types of business models.

Profit per employee varies dramatically across industry sectors. Data collected in 2009, for instance, shows[11] that finance, media and tech companies reap in excess of $150,000 per employee. In the food, airline and pet industry, by contrast, profit per employee falls far below $25,000.

The significance of these differences shows up in how much workers would stand to gain from redistributed CEO salaries. To take one example, Oracle CEO Larry Ellison’s chart-topping salary of $78.4 million would translate[12] into just $930 a year in extra pre-tax income for each of Oracle’s employees. In industries with much narrower profits per employee, the cash value to employees of redistributed CEO pay can be vanishingly small.

As a result, the effect of SB1372 would be to penalize corporations without regard to their profit per employee. That’s at odds with its intended goal of using tax policy to pressure companies to improve their employees’ economic fortunes. Especially in industries with a low profit per employee, narrowing pay disparity will have no measurable effect.

For that reason, SB1372 is likely to meet stiff resistance, despite its support[13] among high-profile national Democrats. Although Republicans are weak in California, nationwide opposition[14] to wage legislation is powerful and well-organized.