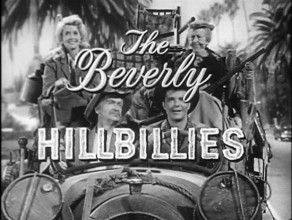 Come and listen to a story about a city named Beverly Hills and its bubblin’ crude.

“The Beverly Hillbillies[1]” still plays on TV in reruns, providing laughs about the Clampetts from Tennessee who strike it rich in oil on their farm, then move to posh Beverly Hills with its “swimmin’ pools, movie stars,” as the opening song[2] goes.

But what’s not well-known is that there’s crude in “them thar” Beverly Hills, too.

And would a “reboot” of the series today include an episode about how the City of Beverly Hills has banned oil drilling by fracking – the horizontal fracturing of rock to extract oil and gas?

On May 6, the City Council[3] unanimously voted to ban fracking, the first city to do so in California. According to the Beverly Hills Courier[4], the new fracking ordinance bans “hydraulic fracturing, acidizing or any other stimulation technique” from any area of the city.

The city press release[5] said that, back in Sept. 2011, the council also passed an ordinance to phase out the oil wells next to Beverly Hills High School by the end of 2016. But horizontal drilling from outside the city – drilling under Beverly Hills — would continue.

So to what extent the new fracking ban will be effective is unknown because companies might set up wells in adjacent cities, then drill under Beverly Hills.

According to the U.S. Energy Information Agency, the Domestic Crude Oil Price for California[6] hovered around $100 per barrel for 2013. That would roughly result in about $74,574,200 in gross crude oil production revenues from the Beverly Hills oil field in 2013.  According to data from the 2014 Los Angeles County Economic Development Corporation Oil and Gas Industry report[7], the Beverly Hills oil field would contribute about $5.839 million in local property taxes (745,742 barrels x $7.83 per barrel property taxes), not all of which would go to the city or its schools.

This does not include additional city business license taxes, franchise fees for oil pipelines within city streets, or the oil extraction royalties that its mineral rights owners derive. In fact the city, Beverly Hills High School, Los Angeles County, the state of California, and some 6,200 holders of oil leases[8] that get royalties from oil wells under Beverly Hills are secondary parties enriched by the oil field.

Even new Los Angeles City Mayor Eric Garcetti[9] co-owns a personal trust with an oil-drilling lease with Venoco Oil with a drilling island located on the campus of Beverly Hills High School.  This does not include all the sales taxes paid by oil company employees buying goods and services in Beverly Hills and Los Angeles County.

So, despite the new law, it’s difficult to tell if Beverly Hills’ fracking ban is real or mostly symbolic. Especially because the city of 34,622 already is saturated in oil.

A portion of the city sits atop a 1,200-acre subterranean oil field that produced 874,000 barrels of oil in 2008, with no discernible negative effect on property values, human health or the environment.  No groundwater from the Hollywood Basin[10], which underlies Beverly Hills, West Hollywood and Los Angeles, has been contaminated. 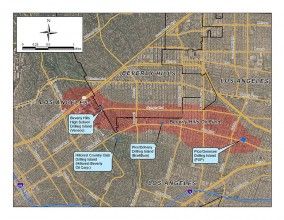 In fact, the city itself, Beverly Hills High School, Los Angeles County, the state of California, and some 6,200 holders of oil leases[11] that get royalties from oil wells under Beverly Hills are secondary parties enriched by the oil fields.

The wealthy people of Beverly Hills were not deterred in 1900 from locating their homes near a productive oil field.  A map of the Beverly Hills oil field shown nearby indicates drilling islands. The fields are four miles long, a half-mile wide and 10,000 feet deep.  Even new Los Angeles City Mayor Eric Garcetti[9] co-owns a personal trust with an oil-drilling lease with Venoco Oil with a drilling island located on the campus of Beverly Hills High School.

State law would not impede fracking in the Clampetts’ back yard. Fracking in California was green-lighted in 2013 when Gov. Jerry Brown[12] signed State Senate Bill 4[13]. It strictly monitors fracking and regulates any fracturing of rock by acidizing techniques, but does not ban it.

Several bills are still pending in the Legislature that would ban or place a statewide moratorium[14] on fracking. But given that Brown already gave his approval for fracking, he is unlikely to sign them.

Hedge fund manager Tom Steyer[15] has called for a law mandating a vote of two-thirds of the people before local fracking is allowed.

Steyer also is interested in funding fracking bans[16] in other states. Banning fracking could protect[17] his green-power investment returns from competition from conventional oil and gas drilling.

Steyer has recently funded his own opinion poll that shows that Californians want an oil-extraction tax[18], and county control over fracking.

Steyer should be taken seriously because in the 2012 election he sponsored Proposition 39[19], a $1 billion tax on businesses that passed and has harmed California’s business climate. For five years, $550 million of the tax increase is dedicated to environmental projects.