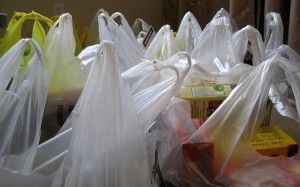 In this dysfunctional state, it figures the Legislature likely soon could ban plastic bags at stores. AP reports[1]:

“Senate Bill 270 [2]passed the Assembly’s Natural Resources Committee on a 5-3 vote following the failure of similar bans on single-use grocery bags in recent years. The latest legislation won support from grocers for including a 10-cent fee on paper bags and from a handful of local plastic bag makers for including $2 million for worker training and assistance to shift to production of reusable bags.”

So it’s yet another tax increase that especially will slam poor people, who tend to have larger families and shop more for groceries. If a family needs, say, two bags of groceries a day, that’s 20 cents a day, or $73 a year. Not chump change if you’re poor and pinching pennies, which pretty much describes life in Taxifornia if you make <$150,000 a year.

The plastic bags ban also supported by such celebrities as Julia Louis-Dreyfus[3], the wealthy TV comedy star, whose father is multi-billionaire Gerard Louis-Dreyfus[4].

But according to James Agresti of Just Facts Daily[5]:

Furthermore, the study found that the average supermarket shopper would have to reuse the same cotton tote from 94 up to 1,899 times before it had less environmental impact than the disposable plastic bags needed to carry the same amount of groceries. This wide-varying amount of reuse that is required until the breakeven point is reached depends upon the type of environmental impact, but the median is 314 times, and it is more than 170 times for all but one of the 9 impact categories.

Why is this? Because the environmental impacts of supermarket bags are dominated by the energy and raw materials needed to manufacture them. Plastic bags are inexpensive because relatively small amounts of energy and raw materials are needed to make them. These same attributes that make plastic bags affordable and light also make them easier on the environment than alternatives like paper bags and reusable cotton totes.

So the new legislation is perfect for California: It does the opposite of what’s intended, hurts poor people to make rich leftists feel good, and raises taxes.