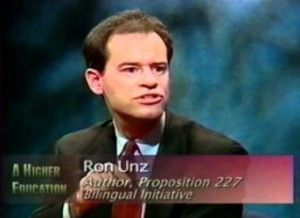 He jointed majority Democrats in a  vote of the California Senate Education Committee to recommended[2] adding an initiative to the 2016 ballot that would restore bilingual education to the state public school system.

Though unable to dictate the votes of Sacramento’s Republican lawmakers, Huff is the Senate Republican Leader.

Bilingual education has been a point of contention in California politics for decades. A GOP switch on the issue would reflect perceived electoral and demographic pressure to woo more Hispanic votes.

But, ironically, one of the Republican Party’s most powerful unofficial leaders on Hispanic-friendly issues is the leading voice opposed to bilingual education.

Prop. 227 triggered several key changes. First, all public school instruction had to be conducted in English. However, parents or guardians could get an exemption by showing their child knew English, had special needs, or “would learn English faster through [an] alternate instructional technique.”

Second, children not fluent in English would be placed in “intensive sheltered English immersion programs” for about a year.

The changes drew California education into a long, drawn-out controversy over what “the science” proved about Prop. 227’s effectiveness. Ten years into the new regime, Unz trumpeted[4] studies that showed students affected by English-only education had doubled their test scores.

Some educators argued that Prop. 227 was more motivated by ideology than facts. But that claim ran contrary to a revealing fact about Unz himself, who does not at all fit the profile of the stereotypical English-only California Republican.

Rather than a hard-liner on immigration, Unz takes a much softer view. An unorthodox thinker who once published the American Conservative magazine, Unz wrote[5] a feature of his own which proposed to debunk the myth of Hispanic immigrant lawlessness. What’s more, Unz recently sought to raise California’s minimum wage to $12 an hour[6].

In an impassioned broadside against the state Senators, Unz has restated the political case for English-only education. “We were opposed by every California union, every political slate, and almost every newspaper editorial board,” he wrote[7], “and were outspent on advertising by a ratio of 25-to-1. But despite this daunting array of influential opponents, our initiative still passed with one of the largest political landslides of any contested measure in state history, winning over 61 percent of the vote.”

Unz is not shying away from warning Republicans that returning to bilingual education will damage their already dire electoral fortunes. For Unz, the “disastrous political choices made by California Republicans during the 1990s” sent “the most powerful Republican state party in America” to “the very edge of irrelevance.”

Restoring “failed” bilingual education, he concluded “would probably mark the final nail” in the state party’s coffin, “and rightfully so.”

In the wake of Huff’s play to change California Republicans’ brand, Unz has thrown down a gauntlet.

Although a single activist can rarely determine the course of a state party’s platform, Unz’s nontraditional views on Hispanics, education, and economics give cover to Republicans eager not to be smeared as racists by Democrats sensing a political opportunity to charge up their listless base for November.

(Editor’s note. This article has been corrected. The original said Sen. Mark Wyland also backed the legislation. I fact, he abstained.)