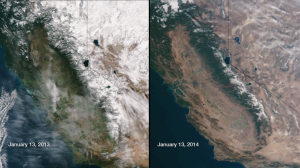 On May 15, Sen. Dianne Feinstein, D-Calif., didn’t pull any punches[1] about her recent attempt to push her drought bill through Congress.  She blasted environmentalists for having “never been helpful to me in producing good water policy. You can’t have a water infrastructure for 16 million people and say ‘Oh, it’s fine for 38 million people,’ when we’re losing the Sierra Nevada snowpack.”

A look at the above satellite photos from the National Oceanic and Atmospheric Administration comparing January 13, 2013 with the same date in 2014 reveals the stark reality that Feinstein and all of California are facing.

Asked by the San Francisco Chronicle about environmentalist opposition to her bill, Feinstein replied, “Well, that’s too bad, isn’t it?  I would be very happy to know what they propose. … I have not had a single constructive view of how to provide water when there is no snowpack.”

Feinstein is specifically referring to Sierra Club California, Audubon California, Environmental Defense Fund and the National Resources Defense Council[2]. They jointly opposed her Emergency Drought Relief Act of 2014, S. 2198[3], back on April 15.  While Feinstein’s drought relief bill stays stalled in Congress, farmers with only junior water rights (those issued after 1914) or no groundwater supplies are still suffering in the Central Valley.

On May 2, Central Valley citrus farmer Ed Chambers[4] explained to Farm Press Daily what is different with this drought from the 1977 drought.  Chambers said California in 2014 has more available water than in 1977, yet growers with junior water rights are receiving zero water allocation.

And in 1977, Chambers was told to expect 1-acre foot of water for his crops, but ending up getting enough water to produce a crop. (An acre-foot is a football field of water one foot high.)

Today, Lake Shasta has double the water than 1977, Lake Oroville 25 percent more.  But farmers have been told to expect zero water, whereas water is still being released in excess for the environment and fish.

The reason cited by farmers for the non-allocation of water is the lack of cooperation of the National Marine Fisheries Service to meet with state and federal lawmakers.

To keep his citrus trees from dying, grower Matt Fisher applied for water from the Terra Bella Irrigation District.  But the “drought duress” price would be $1,200 per acre-foot, $1,000 higher than the normal $200 price.  About 3.2 acre-feet[5] of water is needed a year to produce a citrus crop.

Environmentalists[6] have tentatively offered to sell back to farmers a share of their environmental water allocation, but at sky-high prices for water that Central Valley farmers had already paid for once[7].

Section 103 (b) (2) (b)[8] of Feinstein’s bill instructs the Director of the National Marine Fisheries Service to recommend revisions to the operation of the Central Valley Project to allocate more water to farmers.

But new laws and funding are empty buckets when there is no water.  For example, Feinstein’s bill would increase the Reclamation States Emergency Drought Relief Act of 1991[9] by $100 million (Section 109) for loans for water purchases by the Bureau of Reclamation to minimize “losses and damages resulting from drought conditions.”

A seemingly self-contradictory provision of S. 2198 requires the Secretary of the Interior Sally Jewell to “reduce water consumption or demand, or to restore esosystems” in the Klamath River Basin (Section 4).  But conserving more water or restoring the environment wouldn’t help farmers much because there isn’t enough water to do either.

Feinstein’s criticism of environmentalists, though welcome to farmers, would need to be accompanied by changes to her S. 2198 to actually bring them more water.