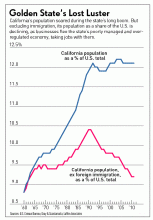 Dr. Arthur Laffer helped design the Proposition 13[1] tax cuts in California in 1978, which undergird what little prosperity California still has; and President Reagan’s 1981-83 tax cuts, which provided 25 years of prosperity, with two minor recessions (because the government ignored Laffer’s advice), until the foolish policies of Republican President George W. Bush and the Federal Reserve Board crashed the economy in 2008.

His new article[3] explains why people are fleeing California:

Anyone who has ever watched Animal Planet should be familiar with migrations. Geese do it, wildebeests and whales do it, turtles do it and, yes, people do it too. To migrate is a natural phenomenon.

What’s interesting about most migrations is their purposes are generally positive: sex, food, sun and other such motivations. “The grass is always greener” is what they say.

For humans and, to a lesser extent, animals, a number of migrations also occur for negative reasons: famine, war, pestilence and, yes, taxes without corresponding benefits.

Over the past 165 years, California has grown at an average annual compound rate of 3.8%. But in recent times it has morphed from being America’s (if not the world’s) greatest people attractor to being a massive population and jobs repellent (see actual population in blue on the chart above).

And there really is no end or solution in sight. If it weren’t for net immigration (people who move from another country to California), California would be a mere shadow of its present size (the population from 1960 on without net immigration is shown in red).

See the full chart and read the rest here[4].