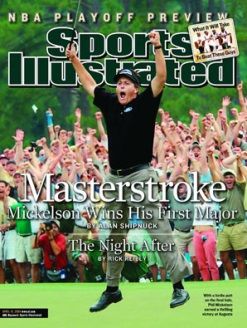 Rancho Santa Fe resident Phil Mickelson was, as they say, trending Friday night for once again behaving in libertarian fashion.

The San Diego native has made news[1] for years with his gambling[2], showing his contempt for societal norms attempting to dictate to adults how they should enjoy themselves.

In January 2013, Mickelson made the Drudge Report (and Cal Watchdog[3])  for grousing about how high his income taxes had become because of the passage of Proposition 30 and federal deduction changes. Here’s Richard Rider’s sharp take[4] on the flap.

Now it’s onto another area in which Lefty acts out in libertarian fashion: taking on (very indirectly) America’s weird[5] and broad[6] rules about insider trading.

Icahn and Mickelson, however, don’t know each other.

Yet when Walters shares an Icahn tip with Mickelson, once again there are Drudge headlines[7] about Mickelson, this time suggesting he is guilty of insider trading[8].

If that constitutes a crime, that’s insane. Some of the coverage hints that this is only the tip of the iceberg. But if this is all the FBI and SEC have, oh, my.

So let’s headline the obvious question:

Will he go speeding and then be bludgeoned for demanding that he be allowed to tape the interrogation after the CHP pulls him over?

Will he go rad and complain that the great majority of stop signs should be yield signs?

Or will Mickelson go micro and foment local civil unrest over the preposterous fact that the manager of the Rancho Santa Fe homeowners assocation makes at least $275,000[9] a year?

We’ll see. It’s an exciting time to be a Phil fan.