CA Dems may finally have CTA vs. Latino showdown 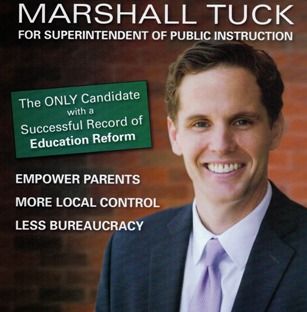 Over the next six months, however, the Dem coalition is likely to be shaken by the race for state superintendent of public instruction. Despite the predictable barrage of vicious and deceptive ads targeting Democratic reformer Marshall Tuck, he advanced to a November runoff against incumbent Tom Torlakson, who is so slavishly attached to the CTA that his office might as well be in Burlingame at union headquarters. What does this portend?

“… the Golden State’s dominant party could finally have the honest debate about the purpose of public education that it so badly needs. Tuck — like other Democrats such as President Obama, U.S. Education Secretary Arne Duncan and former Los Angeles Mayor Antonio Villaraigosa — believes that public schools are too skewed to the interests of veteran teachers. The power of their unions translates into laws that make it virtually impossible to fire incompetent teachers — and such teachers cluster in the poorest school districts. That’s terrible news for disadvantaged Latino communities.

“A runoff election means Torlakson will have to explain why he joins the teacher unions in embracing this anti-Latino status quo. And why he doesn’t seek to enforce a state law that says student performance must be part of teacher evaluations. And why he refuses to help efforts to make it easier to rid schools of classroom sexual predators.”

That’s from what I wrote[2] for the U-T San Diego.

The battle over the future of California public education also has another front, in a Los Angeles courtroom. That’s where the Vergara vs. California lawsuit is being heard.

The suit contends that present state laws so protect bad teachers — and so damage the mostly Latino students who end up being taught by them — that they amount to a civil rights violation[3]. Here’s Harvard education professor Jill Anderson’s take on the lawsuit:

“The basic claim in this lawsuit is that California’s handling of teacher tenure, dismissal, and the like are resulting in grossly ineffective teachers being placed in classrooms; that these teachers are disproportionately affecting low-income and minority students; and that this violates the California Constitution’s guarantee of equal protection. In other words, the claim is that California is violating its own constitution by not doing enough to ensure that all children have access to a highly qualified teacher.

“This case represents a fascinating, and potentially pivotal, moment in the history of education litigation based on education rights and equal protection rights in state constitutions. Most of the cases relying on these rights have been about school funding, with the claim that unequal funding violates provisions in state constitutions that guarantee a right to an adequate education or provisions that promise equal protection. But there’s no reason in theory why those rights to an adequate or equal education have to be defined solely in terms of funding, and this case is a good example of how those rights might be used more broadly.”

All of which gets back to my basic point: about how peculiar it is that the CTA/CFT and Latinos are even in the same political coalition. The former should be the latter’s enemy. Maybe by year’s end, the latter will have figured this out.