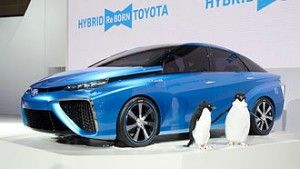 The hype surrounding electric cars is running out of gas — and the Department of Energy is directing funds toward hydrogen.

Nearly $7 million in federal financial support is headed[1] to five California developers working on hydrogen fuel cells, which emit only water vapor as a byproduct. Foremost among the recipients are Ardica[2], in San Francisco; HRL Laboratories[3], in Malibu; Lawrence Livermore National Laboratory[4], in the East Bay; Materia[5], in Pasadena; and the Livermore branch[6] of Sandia National Laboratories.

In a press release, the DOE calls[7] the fuel cell effort “critical to the widespread commercialization of hydrogen and fuel cell technologies.”

Hydrogen technology remains limited in its applications to automobiles, as a result of its weight, size, cost and range constraints. Nevertheless, hydrogen fuel cells are back in vogue after being eclipsed by the trend in favor of electric vehicles.

In general, the market challenges facing electric cars are even more substantial than those surrounding fuel-cell vehicles. That’s the case even though electric cars have been on the market for more than a century. Multiple auto manufacturers have labored to broaden their appeal. Government funds have been used to incentive their use.

But whereas experts recently estimated 5 to 10 percent of the market would be penetrated by electric vehicles worldwide, today optimistic estimates don’t exceed 1 percent, according[8] to an investors’ report by Morgan Stanley Research cited by the Los Angeles Times.

As supporters and critics of electric cars both know, the vehicles suffer from a short range augmented only by repeated fuel-ups at relatively rare recharge stations. Perhaps even more important, electric vehicles have failed to meet the performance and aesthetic expectations of most American consumers. Although sales are rising, they’re still so low that manufacturers and dealerships are cooling to the cars. Time magazine reports that a combination of high production costs and relatively low gasoline costs are souring[9] analysts, dealers and customers on electric vehicles.

For automakers, that raises the stakes when it comes to hydrogen cells. Toyota, for instance, is staking a fuel-cell push[10] on California’s so-called hydrogen highway — an undertaking began under then-Governor Arnold Schwarzenegger that’s on track to cost[11] the Golden State some $150 million.

Toyota’s turn to hydrogen is part of a swift pivot away from electric. Its partnership with Tesla is being brought to an end, thanks to paltry[12] consumer interest in an electric RAV4 model. There’s just one problem: the infrastructure for fuel cell cars is only part of the equation for hydrogen success. The other part is the hydrogen itself.

Pure hydrogen, it turns out, is hard to come by. “Despite being the most common element in the universe,” observes[13] one report, “pure hydrogen is not particularly easy to come by on Earth. The most common method of producing hydrogen involves stripping it off hydrocarbons like methane and gasoline through a process called steam reforming. That doesn’t do much to reduce our dependence on fossil fuels, but other methods like bioreactors and water electrolysis are far from efficient enough for industrial scale production.”

For alternative-energy skeptics, there’s a certain irony in environmental regulations pushing automakers toward a solution that keeps American drivers fossil-fuel reliant. As PBS reports[14], solar or wind power could theoretically be used to produce hydrogen for fuel cells — but that’s not part of current technology.

It’s all enough to leave some asking why automakers would even bother. After all, environmentalists who favor electric vehicles are criticizing Toyota, Hyundai[15] and others for working on hydrogen fuel cells at all. “Many of them even call the new technology a waste of time, requiring a whole new network of expensive fueling stations,” according[16] to the San Francisco Chronicle. “Fuel-cell cars, as a result, will jump into the market without a safety net.”

Car manufacturers are jumping in large part because they’re being pushed by state and federal initiatives. Along with seven partner states, California has pledged to ensure that 3.3 million electric or fuel cell vehicles are in use by 2025. That’s a stretch[17], not least because 15 percent of those cars are intended to be zero-emissions vehicles, and not just hybrids.