Californians with a green streak are in love with mass transit — at least when it involves rail. Buses are far better[1] at helping people, especially poor people, to and from work. But there’s something about rail and how it seems like an explicit rejection of the internal combustion engine that attracts the enviros. It’s a way of shouting, “Cars are evil! I’m morally superior for believing cars are evil!” 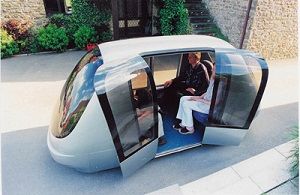 This worldview is driving current proposals in Sacramento to divert cap-and-trade funds to the bullet-train debacle and light-rail. But what’s both strange and unsurprising is how all the pols — and all the reporters covering them — ignore the fact that we could be on the verge of a transportation revolution because of driverless cars.

This is strange because so much has been written about driverless cars’ vast potential to change modern life. This essay just came out Friday[2]. This Google boast came out last month[3]. This Forbes analysis came out last year[4]. Kevin Drum of Mother Jones, an Orange County resident, had this to say[5]:

“I think that genuine self-driving cars will be available within a decade and that they’ll be big game changers. When you’re not actually driving a car yourself, for example, you don’t care much about how powerful it is. So you’ll be happy to chug along in a super-efficient car, reading a book or playing on your phone. You’ll be more willing to share a car, since automated systems will be able to quickly put together carpools with guaranteed maximums on wait time. And of course, driverless cars will be fundamentally more fuel-efficient since computers can drive cars better than humans can.”

Oh, yeah, light rail can compete with this.

So why is it unsurprising that the Sacramento beat reporters don’t incorporate this into their stories about mass transit, the bullet train or anything involving transportation?

For example, I’ve never seen a single story in the Sac Bee or L.A. Times that ponders why the CTA and the CFT were so quick to go along with the governor’s Local Control Funding Formula change in how school funds are allocated.

The obvious answer is that they think it will be good for them — that they can manipulate the rules so that the extra funds supposed to go to struggling students instead go to teachers’ compensation.

But this is too obvious to write about, evidently.

So while excitement builds outside the Capitol as people contemplate a bold new world of driverless cars, inside the Capitol, the pols think it’s still the 1980s, and that light-rail is the bomb, and the journos don’t think that’s crazy.